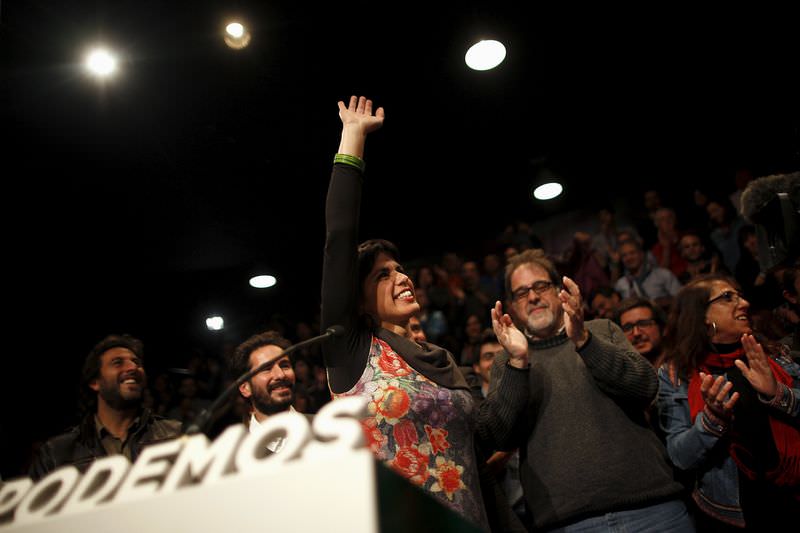 | Photo: Reuters
by Mar 23, 2015 12:00 am
Spain's radical left Podemos party took third place on Sunday in a regional vote in Andalusia, seen as a crucial test for the political newcomer. Podemos had won 14.8 percent of the vote in the southern region ranked third in polls of voting intentions in Andalusia. The election results show that the radical party was able to enter Andalusia's regional parliament for the first time. However, it is not enough to challenge the country's two traditional political heavyweights.

The main opposition Socialist Party, in power in Andalusia since 1982, topped the poll with 35.4 percent of the vote. The conservative Popular Party, the country's ruling party, came second with 26.7 percent - down from 40 percent in the previous election in 2012.

The two parties have taken turns governing Spain since the 1980s, but with a national election due around November, they are nervously eyeing the rise of Podemos buoyed by the victory of its ally SYRIZA in Greece and that of another upstart, the center-right Ciudadanos (Citizens).

"Thank you Andalucia... thank you for taking this first step, we will move forward," Podemos leader Pablo Iglesias said on Twitter.
Podemos told the private Sexta channel that it had weakened the country's "bipartisanship", noting that the two main parties together claimed 80 percent of the Andalusian vote in the last election, compared to around 60 percent now.

Deputy leader Inigo Errejon added that Andalusia, one of the country's poorest regions, was different from other parts of Spain, with a "more rural" and older population inclined "to preserve the traditional balance".

Sunday's vote in the recession-ravaged region of farms and tourist beaches was seen as a prime testing ground for Spain's new political dynamic, transformed by the economic crisis and ensuing austerity measures.

The near-complete results gave no single party an absolute majority in the regional parliament from Andalusia's 6.5 million voters.

Andalusia was among the regions hardest hit by the collapse of Spain's housing market and ensuing financial crisis in 2008. Its unemployment rate is the highest in Europe at 34.2 percent.
Socialist leaders there, along with some union representatives, have been hit by a series of corruption scandals. They have also fallen out with their current coalition partners, the United Left.
The near-complete results Sunday were in line with opinion polls, which had predicted a loss of support for the Popular Party, blamed by voters for hardship under the economic cuts its national government has imposed.

Formed only in January 2014, Podemos has topped national opinion polls. Like its Greek ally Syriza, it has tapped into a wave of discontent about painful austerity measures imposed during the economic crisis. Podemos was initially boosted by SYRIZA's January election victory, but has been given pause for thought by the ongoing squabbles between the Greek party and European powers over the country's crippling debt.

But his alleged links to Venezuelan leaders -regular bogeymen in the Spanish media - and his support for SYRIZA could put off some voters.

Ready to scoop them up is Ciudadanos, which started as a Catalan anti-independence party and has expanded onto the national stage in recent months. It shares Podemos's stance against corruption but strikes a more moderate tone.
"In Ciudadanos, we want justice. What Podemos wants is revenge," the party leader Albert Rivera, 35, said in a recent interview in Spanish El Mundo newspaper.
Last Update: Mar 23, 2015 9:25 pm
RELATED TOPICS