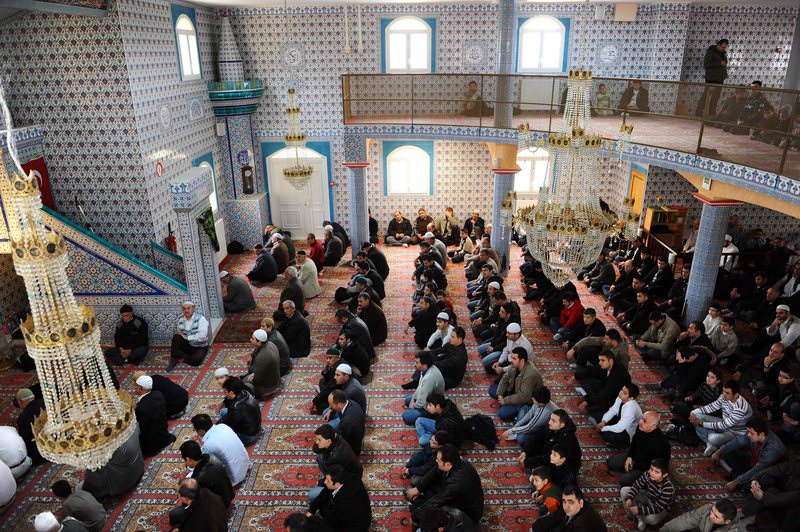 Mosque of Andrezieux, a commune close to St. Etienne | AA Photo
by Anadolu Agency Apr 06, 2015 12:00 am
A French senator has called for more rules to be introduced before more mosques can be built in France, after the French Council of the Muslim Faith called for the number of Islamic places of worship to be doubled in the country.

French Senator Herve Maurey said in an interview with newspaper Le Figaro published on Monday that more transparency about funding and construction plans were among a number of regulations which should be enacted before the construction of mosques was increased.

He said: "Currently, a mayor who sees a mosque being built does not know how the place of worship is being funded. We therefore propose that the contracting authorities are obliged to provide a financing plan certified by an auditor. This will improve transparency and raise awareness that elected officials and citizens can legitimately oversee (such projects) as we have no idea about how mosques are funded in France."

Maurey's comments came after Dalil Boubakeur, the president of the Paris-based French Council of the Muslim Faith which was created 12 years ago to officially represent the community in France, called on Saturday for a doubling of the number of mosques in France.

Boubakeur said that the number of mosques in the country should double in the next two years to address the lack of places of worship for the nation's seven million Muslims, as he spoke at the annual gathering of Muslims in France, organized by the Union of Islamic Organizations of France at Le Bourget - a commune in the suburbs of Paris. There are currently about 2,200 mosques in France, according to official statistics.

Maurey's comments came three weeks after a report, which he had commissioned on the funding and construction of all places of worship in France, was released.

The report proposed that "full transparency" needed to be applied to mosque financing and said 97 percent of mayors across France did not see the need for the construction of new places of worship for any religion. However, the mayors overwhelmingly preferred to construct new places of worship, rather than have religious services held in private houses or other makeshift buildings.

"The problem is not building new mosques, but integrating them into the localities," said Maurey.

The far-right National Front party, which has no deputies in the French parliament, described the call as "ludicrous and dangerous," in a statement released on Monday. The National Front's statement said: "This announcement is provocative, and it seems particularly irresponsible. Who is Mr. Boubakeur to make such a ludicrous and dangerous proposal? Financial support by some foreign states? Which have links with the worst extremist movements in the world, is a clear threat to national security."

Although there has been no official reaction from the French government, Prime Minister Manuel Valls announced in February that a plan to "reorganize" the Muslim community in the country should be considered. The proposal includes regulations on the construction of mosques and measures on governing the education of imams.

Boubakeur also announced he was negotiating an agreement with several universities in Paris to administer the non-religious part of imam education. Courses at the university would include French law and traditions so that imams would have both a religious education and one based on understanding the republic of France.

Amar Lasfar, president of the Union of Islamic Organizations of France, supported Boubekeur's proposals. "We are loyal to our country, France. We love God, we love our Prophet, but we also love the French Republic," Lasfar said.

As of January of this year, 167 acts of violence or threats against mosques have been reported in France, compared to just 14 in the same period last year.