Italy rescues 1,500 migrants in Mediterranean in one day 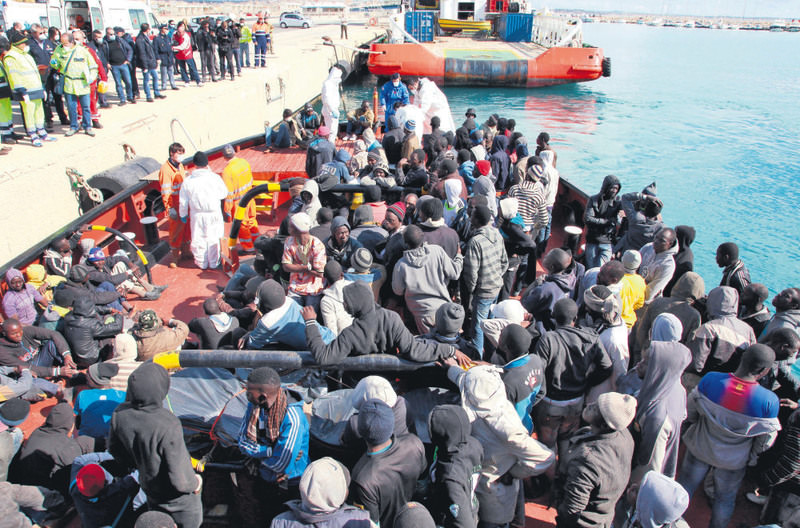 by Compiled from Wire Services Apr 06, 2015 12:00 am
Some 1,500 migrants trying to cross the Mediterranean to Italy in five different boats were rescued in one day, Italian coastguards said. Four coastguard vessels and an Italian navy ship intervened Saturday to save three large boats carrying migrants off the Libyan coast after intercepting distress calls from satellite telephones, only to find two other migrants boats in difficulty nearby. The Italian vessels were on Sunday transferring the migrants to the island of Lampedusa and the Sicilian ports of Augusta and Porto Empedocle. In a separate incident on Saturday, 318 migrants were brought to the Sicilian port of Pozzallo after being rescued off Libya by an Icelandic navy ship taking part in a patrol for the EU borders agency Frontex. The migrants included 14 children and five pregnant women, authorities said. The number of migrants entering the EU illegally in 2014 almost tripled to 276,000, according to Frontex, nearly 220,000 of them arriving via the Mediterranean. The chaotic situation in Libya has sparked a rise in migrant boats setting out for Europe from its unpoliced ports carrying refugees fleeing conflict and poverty in the Middle East and Africa.

Italy wants Egypt and Tunisia to play a role in rescuing stricken migrant vessels in the Mediterranean, a government planning paper showed, so that survivors could be taken back to African instead of European ports. The plan, which calls for the European Union to support the proposed Egyptian and Tunisian operations, was prepared by the Italian home affairs ministry and seen by Reuters. It represents an attempt to stem the growing flow of people risking their lives to reach Europe, most of whom try to get to Italy, often on overcrowded or defective vessels.

More than 30,000 migrants have died in just over 20 years between 1993 and 2014 while trying to cross the Mediterranean Sea in hopes for a better future in Europe, an expert told AA. Nicolas Lambert, an expert with the French National Centre for Scientific Research, said, "The Mediterranean Sea is the world's most dangerous migration path." Lambert, a cartographer, prepares maps based on files of migrants and civil society organizations records. He has listed migrant tragedies from 1993 to present day, and how they died. "Most migrants died of drowning, starvation, or from the cold during their journeys," he said.

Since 1999, the European Council on Justice and Home Affairs has taken several steps towards strengthening cooperation in the areas of migration, asylum and security. In 2004, the European Union established the European Agency for the Management of Operational Cooperation at the External Borders of the Member States of the EU, or Frontex, to reinforce cooperation between national border authorities.
Last Update: Apr 06, 2015 11:14 pm
RELATED TOPICS