Cossacks in east Ukraine fight both government and other rebels 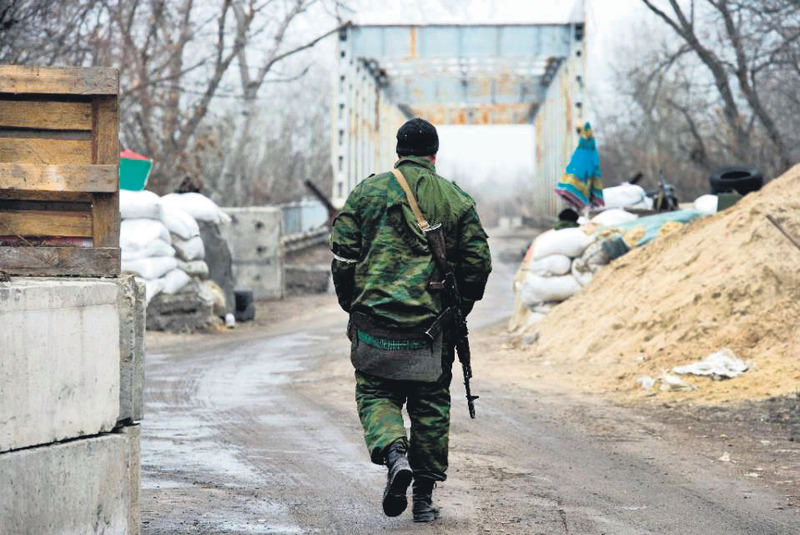 by French Press Agency - AFP Apr 07, 2015 12:00 am
The young Cossack fighter gripped his automatic rifle as he swore he would defend the town of Perevalsk in war-torn east Ukraine that he and his comrades now control. "We're expecting an attack. We're prepared, no one can enter the town," the man in his twenties said, a traditional Cossack fur hat on his head. The frontline separating these pro-Russian rebel fighters from Ukrainian army troops in this troubled region lies only 30 kilometers (20 miles) away. But the enemy the Cossacks fear most is the enemy within the separatist leaders of the self-declared Lugansk People's Republic (LNR) who they refuse to obey. "We're under the orders of our Russian brothers of the Great Army of the Don Cossacks. We don't recognize the authority of the LNR," said the soldier. In this small town some 30 kilometers of the separatist bastion of Lugansk, a handful of well-armed and somewhat nervy Cossacks man a roadblock adorned with their blue, yellow and red flag inscribed with the words "For faith, the Don and the Fatherland." Elite horsemen in the Tsarist army in the old days, frontier Cossack communities were set up over the centuries across the former Russian empire, with the Don Cossacks primarily claiming lands stretching from southwest Russia to Ukraine's eastern Donbass region. Now they claim to be defending the interests of Russia abroad while fighting for their fierce brand of reactionary nationalism.

Igor Plotnitsky, head of the Lugansk rebels battling the Kiev government, set an April 4 deadline for the Cossacks to join the LNR's military wing, hand over their weapons or be outlawed. The deadline was no idle threat. Faced by blatant Cossack disobedience, the Lugansk rebels have hit back hard against the militiamen in recent weeks. On March 30, Cossacks were attacked and disarmed in the neighboring town of Petrovsk in an operation in which several people died. A month earlier a leading local Cossack Ataman, or leader, was arrested nearby in a deadly raid. In January the Cossack mayor of Pervomaisk, Yevgeny Ischenko, was shot dead by unknown gunman while a local warlord allied to another group of Cossacks, Alexander Bednov, known by his nickname "Batman", died along with six bodyguards when his armored car was hit by an anti-tank missile in an ambush. "LNR special services liquidated the head of a criminal group," the Lugansk authorities said at the time.

AFP reporters noted that some 20 kilometers north of Perevalsk, the town of Stakhanov, which is under Cossack control, is on a state of alert with foreigners unable to enter or leave without a pass and a military escort, an apparently unique security situation in the area. The deputy mayor of the town, that now houses some 70,000 people, does not hide the fact that relations with the Lugansk rebels are tense. "Plotnitsky said that there is no question of autonomous Cossack territories," Vasily Kiselyov, 39, told AFP. "He wants a strong central power. That is what we are opposed to. We want more freedom." Sitting in his office under the portrait of a local Cossack leader, Kiselyov called for Plotnitsky to be ditched after accusing him and his cronies of pilfering aid deliveries coming from Russia and siphoning off coal supplies. "We didn't get rid of the Ukrainian oligarchs just to replace them with a new bunch," he said. More than just the allegations of corruption, accusations that the Lugansk rebels fling right back at them, the Cossacks lambast the separatist leaders for signing a Russian-backed ceasefire deal with the Ukraine government that they say they do not recognize.

The problem of the renegade Cossacks is a major headache for the rebel chiefs in the Lugansk region, the smaller of two separatist enclaves, and shows the splintered loyalties of some of the rebel groups in the east. Now as the fighting has died down along the frontline with Ukrainian forces since the February truce deal, the insurgent leadership has had more opportunity to refocus its attention on bringing the unruly Cossacks into line. But that does not seem to be worrying the Cossack deputy mayor, as he sits under an icon of the Virgin Mary and Stalin. "That was a wise man," he said of the Soviet tyrant.
Last Update: Apr 07, 2015 11:23 pm
RELATED TOPICS