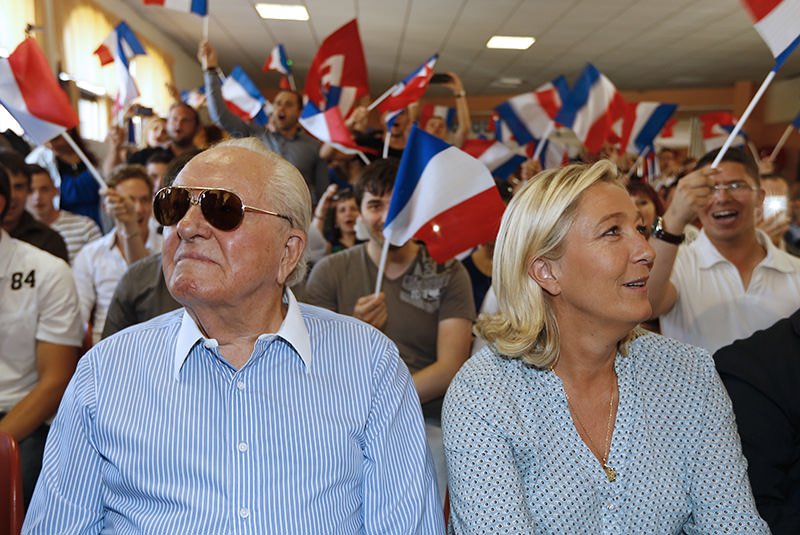 | AFP Photo
by Daily Sabah with Agencies Apr 08, 2015 12:00 am
Marine Le Pen, the leader of France's far-right National Front (FN) made an announcement on Wednesday that she would "oppose" her father's candidacy in the upcoming regional elections due to his comments that the Nazi gas chambers were only a "detail in history."

Jean-Marie Le Pen, the 86-year-old founder of the FN party, has dominated headlines in recent days, with his views on the Nazis and his defense of war-time French leader Petain, who collaborated with Hitler's regime.

His latest comments appear to have been the last straw for his daughter Marine, who has been trying to clean up the party's anti-Semitic and racist image since she took over in 2011, a move that has seen it soar in opinion polls as it attracts more mainstream voters.

Jean-Marie Le Pen is veering between "political suicide" and "a scorched earth strategy", his daughter said in a statement.
In a statement on Wednesday, Marine Le Pen said she will quickly convene the party's executive bureau to seek "means to best protect the political interests of the National Front." She said she'd oppose her father's candidacy to head the list in December's regional elections in southern France.

"His status of honorary president does not allow him to take the National Front hostage, to make such crass provocations that appear aimed at harming me but which unfortunately hit the entire movement, its officials, candidates, members and voters very hard," she added.

Marine Le Pen said she would oppose his standing in regional elections in December in what deputy party leader Florian Philippot described as a "total and definitive" split between father and daughter.

Speaking of her "deep sadness", she said she would call a meeting of party top brass "to discuss with him how to best protect the political interests of the National Front".
Last Update: Apr 08, 2015 6:14 pm
RELATED TOPICS