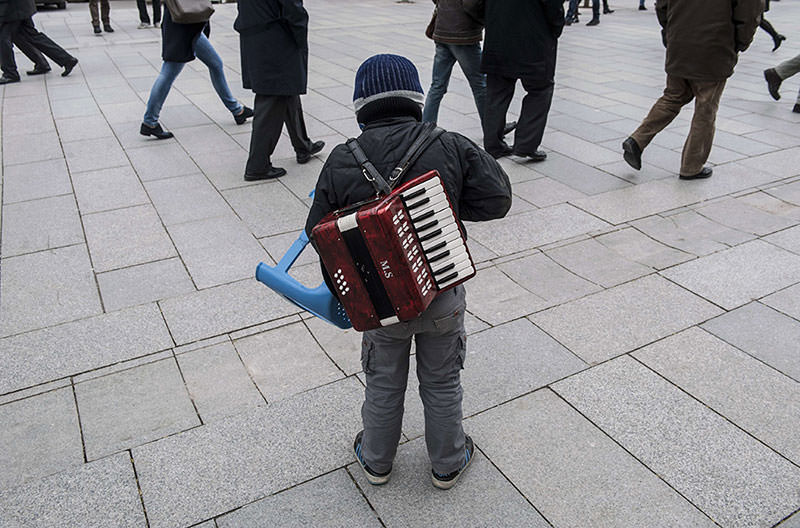 An ethnic Roma child counts his money after playing music for people on a small accordion | AFP Photo
by reuters Apr 09, 2015 12:00 am
Prime Minister Erna Solberg apologized on Wednesday for discrimination against Norway's Roma population before and after World War Two, calling it a dark part of the country's history, and promised to pay reparations.

The Scandinavian country's small Roma minority, of around 500, have campaigned since the 1990s for compensation for their mistreatment.

Solberg's comments followed the release of a government-commissioned report in February that detailed how Norwegian Roma citizens in the 1930s were denied re-entry after travels abroad. It named 62 people who ultimately perished in Nazi death camps following the rejections.

Survivors of the death camps were also denied re-entry to Norway after the war for up to 10 years, the report by the Center for Studies of the Holocaust and Religious Minorities showed.

The prime minister said the measures taken by the authorities at the time amounted to a "racist exclusion policy".

"It's time for a moral reckoning with this dark part of our history. The state recognizes its responsibility for the errors that were made and the injustice done to Norwegian Roma," Solberg said in a statement.

Data from the mid-1920s shows that between 100 and 150 Roma lived in Norway at that time, according to the Center for Studies of the Holocaust and Religious Minorities.

More research was needed to uncover the full extent of what happened to Roma in Norway during German occupation of the country from 1940-1945, the report said.

Solberg promised that the right-wing coalition government would pay reparations but said the details would be worked out in cooperation with Roma representatives.

Elsewhere in Europe, Greece is seeking 278.7 billion euros from Germany in reparations from World War Two.