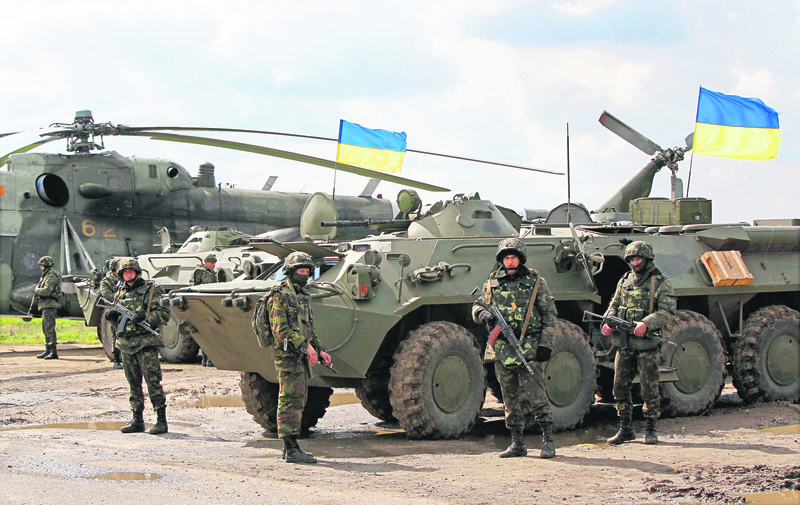 Ukraine has been dragged into a deadly civil war since the ouster of former President Yanukovych.
by Begüm Tunakan Apr 10, 2015 12:00 am

As Greece re-orients the country's strategic interests toward Russia, Ukraine is on the pro-Western path to seek NATO membership in order to stop Russian threats to its territory

While Greece is turning away from Europe and looking toward Russia in the hope of finding financial assistance for its debt crisis, Ukraine is accelerating its steps toward NATO membership by signing a memorandum under the Partnership for Peace program. Ukraine's move comes amid Greek Prime Minister Alexis Tsipras's controversial two-day visit to Moscow. At a time when Moscow is left increasingly isolated over Ukraine, Greece's move has led to speculations by international creditors that Greece could pivot to Russia deviating from the EU after failed bailout talks with its International Monetary Fund and European Central Bank creditors.

The leftist-led Greek government never strongly supported sanctions against Moscow over the war in Ukraine due to a strong historical friendship and deep cultural ties. Tsipras has criticized the EU-imposed sanctions on Russia on the grounds that the economic war with Russia would severely damage EU countries' stagnant economies in return.

As the crisis continues in eastern Ukraine, Kiev is strengthening cooperation with NATO in order to meet the criteria needed to join the organization.

"The [Ukrainian] government has decided to sign a memorandum of understanding between the government of Ukraine and the NATO Communications and Information Agency on cooperation in the matters of consultations, management, communications, intelligence, surveillance and reconnaissance as part of NATO's Partnership for Peace program," Ukrainian Prime Minister Arseniy Yatseniuk said at a cabinet meeting on Wednesday.

The Ukrainian Ministry of Defense also announced that they will introduce strong changes in the Ukrainian armed forces and switching to new standards of military training. "The work continues to switch to new standards of combat readiness, training of troop and management agencies on all levels, taking into consideration the experience of the ATO [anti-terrorist operation] and the requirements of compatibility with NATO," Ukrainian Minister of Defense Stepan Poltorak said on Thursday.

NATO-Ukraine relations formally began in 1991 and the country remained a non-aligned state until the crisis in eastern Ukraine erupted in March after the Russian annexation of Crimea. Russia considers Ukraine's possible NATO membership a national security threat to its borders and NATO's eastward expansion has angered Russian authorities.

Ukraine took a historic step on the path to NATO membership in December 2014. Considering Ukraine's renunciation of its neutral military and political status through taking steps to join NATO, the Ukrainian parliament passed a law proposed by Ukrainian President Petro Poroshenko on Tuesday in a bid for NATO membership in December. The country's long-term non-aligned status was renounced after the law was backed by 303 lawmakers out of a total of 450. The law envisages "the abandonment of the non-bloc status and a return to NATO rapprochement that will significantly increase Ukraine's positions in defense."

As Russian President Vladimir Putin and Tsipras met, Greece was not satisfied with what Putin offered. In search for alternative sources of financial assistance, Putin has offered Tsipras more cooperation on energy and industry, while leaving Athens to fend for itself in resolving urgent debt problems with European creditors.

"Greece is not a beggar to go around all the countries asking them to help resolve its financial problem," Tsipras said. "It's not a Greek problem, it's a European one. And for this European problem, there will be a European solution," he added.

Greece has long suffered from sweeping spending cuts and a painful six-year recession. Tsipras's anti-bailout government risks running out of money within weeks. Austerity measures being pursued by eurozone countries, including Greece, have led to a political battle within the countries over whether the belt-tightening policies have gone too far at the expense of economic growth.
Last Update: Apr 10, 2015 10:51 am
RELATED TOPICS