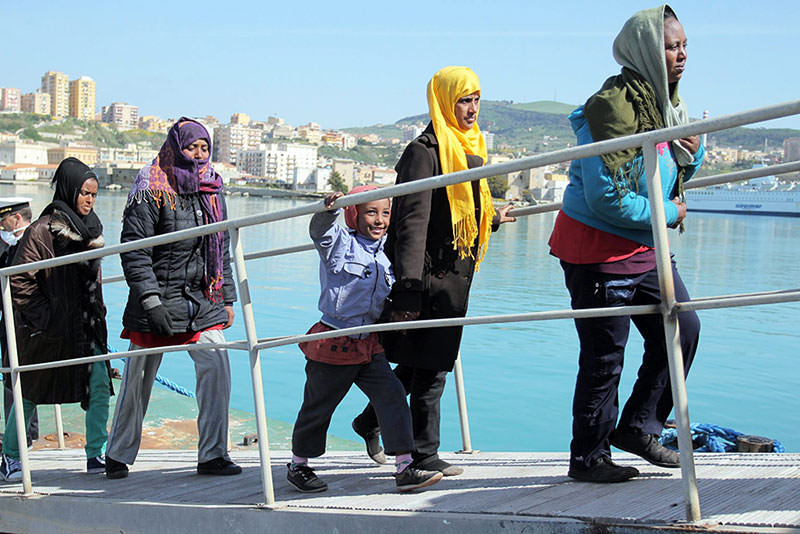 | EPA Photo
by French Press Agency - AFP Apr 14, 2015 12:00 am
The surge in attempted illegal crossings from the coast of North Africa and the question of whether or not Italy is responsible for housing all new arrivals has led to severe criticism from far-right groups in the European country. With the Italian coast guard rescuing thousands of migrants and refugees in the Mediterranean, far-right political parties and supporters have hardened their stance on the immigration issue. The country, the top destination among Southern European countries for migrants and refugees attempting to cross the Mediterranean Sea, has been dealing with growing anti-immigrant sentiments.

Prime Minister Matteo Renzi is "looking for another 6,500 beds for immigrants," said Matteo Salvini, head of the anti-immigrant Northern League, which has developed anti-immigration rhetoric ahead of regional elections in May. "I ask the league's governors, mayors, assessors and councilors to say 'no,' with every means, to every new arrival. The league is ready to occupy every hotel, hostel, school or barracks intended for the alleged refugees," Salvini said on Facebook on Tuesday.

The center-left government policy of rescuing immigrants at sea encourages others to attempt the journey, the far-right groups stress. "It is an absolute disgrace that the government, instead of repelling the invasion of clandestine immigrants, thinks to appropriate thousands and thousands of beds, giving in to the invasion," said Senator Maurizio Gasparri from the center-right Forza Italia (Go Italy) party.

The center-left Italian government gives hundreds of structures across Italy 30 euros a day per migrant, with 2.50 euros going toward pocket money and the rest earmarked for bed, board and services such as legal assistance for applying for asylum. Critics have said this hospitality business, which at the end of 2014 housed over 32,300 migrants according to the Italian interior ministry, is worth around 1 million euros a day and attracts profiteers and organized crime.

The country serves as a gateway to European borders while dealing with the heavy influx of immigrants. According to the U.N.'s figures, 170,100 refugees and migrants fled violence, conflict and persecution in Syria, Eritrea, Iraq, and elsewhere before crossing the Mediterranean Sea and reaching the Italian coast along dangerous sea routes in 2014.

Italy has grappled with a wave of incidents involving rescue operations to save immigrants who risk their lives on the dangerous journey. The Italian authorities launched their rescue operation for a crewless ghost ship, which had been left drifting with many children, women and elderly immigrants on board, as Italian authorities rescued 360 migrants suffering from hypothermia and hunger in January.