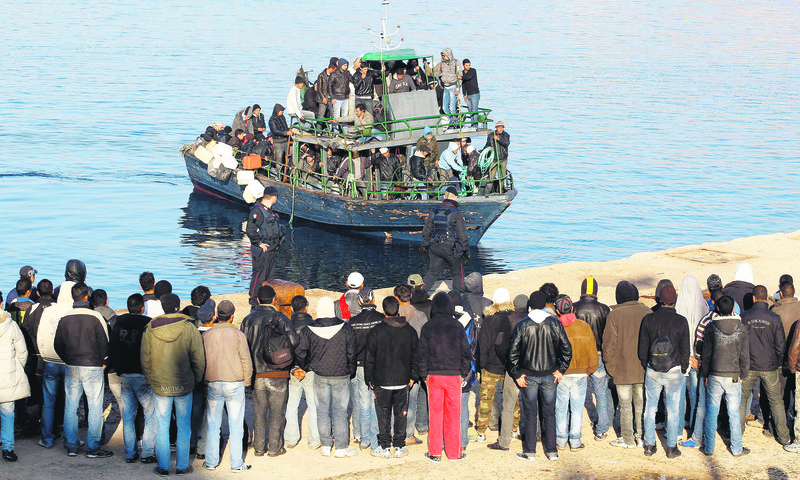 The human tragedy off EU country coasts continues as 400 lives were lost in the Mediterranean Sea. The EU's inaction to prevent the devastating toll has been criticized by international human rights groups

The tragic death of 400 migrants in the Mediterranean Sea between April 11 and April 13 suggests that existing European mechanisms and operations are not sufficient to reduce the risks and danger and prevent further tragedies at sea, international human rights groups have said. Human Rights Watch (HRW) condemned the EU over its "intolerable inaction," which costs many lives at sea.

"If the reports are confirmed, this past weekend would be among the deadliest few days in the world's most dangerous stretch of water for migrants and asylum seekers," said Judith Sunderland, senior Western Europe researcher with the Europe and Central Asia division at Human Rights Watch. "But the unbearable number of lives lost at sea will only grow if the EU doesn't act now to ensure search and rescue operations across the Mediterranean."

Regarding the desperate situation of migrants left dangerously drifting in the Mediterranean, the HRW and the U.N. High Commissioner for Refugees (UNHCR) called on European countries to take humanitarian imperatives by implementing a Mediterranean-wide search and rescue operation.

The UNHCR prepared an action plan called the EU Solidarity for Rescue at Sea and Protection of Asylum Seekers and Migrants as part of the Central Mediterranean Sea Initiative (CMSI) to save lives and provide international protection for those who attempt dangerous sea crossings. The CMSI action plan urges enhanced cooperation between EU countries to step up search and rescue operations along Mediterranean routes in solidarity in the EU. The action plan involves not only EU countries, but also collaboration with a broad variety of actors, including countries of transit and first asylum and countries of origin.

Some European countries, however, have refused to participate in rescue missions to save migrants attempting dangerous sea crossings. Britain earlier refused to participate on the basis that such a mission would create a pull factor for illegal immigration and encourage more migrants to leave their home countries to live in the better conditions that exist in Europe. The British government's refusal to support search and rescue missions to rescue refugees in the Mediterranean Sea has faced growing criticism from international human rights organizations like Amnesty International, which has said such a move would be immoral.

The new EU policy, Operation Triton, for refugees and asylum seekers trying to reach Europe imposed strict measures on search and rescue operations in the Mediterranean Sea as of November 2014. The rescue operation was heavily criticized when implemented because the main focus of the joint EU mission is only to manage border security control to keep the massive number of migrants away from coming to Europe. The EU border agency, Frontex, in a statement released on its website, said: "Operation Triton … cannot be expected to handle the migrant challenge alone. It has two aircrafts and helicopters at its disposal, two open sea patrol vessels and four coastal ones: a fleet appropriate to its mandate, which is to control the EU's borders, not to police 2.5 million square kilometers of the Mediterranean." Italy's former massive humanitarian naval operation dubbed Mare Nostrum had been credited for saving thousands of lives.

Frontex does not operate as actual border police responsible for search and rescue. Instead, the organization organizes the cooperation of border police of EU member states to "send border guard personal and equipment for joint policing of borders."

The increasingly violent and chaotic situation in the Middle East and the four-year-long war in Syria has led many people to flee the conflict in an attempt to seek security and shelter in more prosperous and peaceful countries in Europe. Over 218,000 refugees and migrants arrived in Europe via the Mediterranean in 2014, as indicated by the UN. More than 3,000 people died or went missing in attempts to cross the Mediterranean to reach Europe. These numbers have been gradually increasing as hundreds of immigrants hope to reach the European shores of Italy, Malta, Spain, Greece and Cyprus.

According to International Organization for Migration (IOM) figures, the total number of migrants rescued off the coast of southern Italy was almost 5,600 in only four days. Favorable good weather conditions have triggered new waves of migrants from the Middle East and Africa, as migrant fatalities at sea continues to rise. "The 2015 migrant smuggling season has resumed in full force, with nearly 8,000 people being rescued in Italian waters since the beginning of April," IOM Italy reported on April 14. "The total number of migrants arriving in 2015 will be almost 18,000. Last year, through the end of April, total arrivals were 26,600," the report said.

Up to 400 migrants, including children and women, set off from Libya and drowned in the Mediterranean Sea while trying to reach Italy on Sunday. The Italian authorities managed to rescue 150 survivors. Those rescued in the operations landed at the port of Reggio Calabria on Tuesday aboard the Italian navy vessel Orione.
Last Update: Apr 15, 2015 9:26 pm
RELATED TOPICS