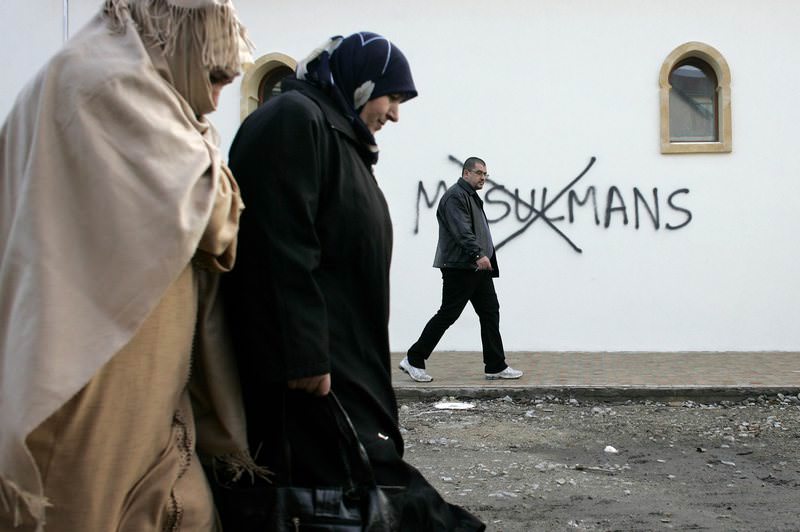 by Anadolu Agency Apr 16, 2015 12:00 am
Anti-Muslims acts have hit a record high in the first trimester of 2015, according to the head of the French National Observatory against Islamophobia.

Abdallah Zekri, head of the Observatory said in a statement that anti-Muslim acts rose by 500 percent, compared to the same period in 2011.

" Never since the establishment of the Observatory in 2011 have Islamophobic acts known such an implosion of actions or threats, especially on social networks," Zekri said on Thursday.

Zekri added that the number of anti-Muslims acts in January 2015 reached 178.

He explained that this "burst" was mainly due to the deadly attack on the offices of the French satirical magazine Charlie Hebdo on Jan. 7, followed by a hostage situation in a kosher supermarket two days later, leaving a total 17 people dead.

"However, those horrific and terrifying crimes cannot justify under any circumstances the steep rise of hatred or revenge against Muslims in France," stressed Zekri.

"They (Muslims of France) are not responsible or guilty of committing these terrorist acts that devastated the country," he added.

Zekri said the assaults targeted men and women, generally in public places and transportation, and in some instances pregnant women.

He also said that in certain cases, targeting mainly places of worship , grenades and firearms had been used.

"This is simply racism and rejection of men and women who aspire to just be respected," said Zekri.

"Does the motto of the Republic 'Liberty, Equality, Fraternity' make any sense? Unfortunately, the question (must be asked)," added Zekri.

Zekri went on to accuse political leaders of remaining silent in the face of such an increase of anti-Muslim acts.

"All this happens without any reaction from politicians, who, instead of denouncing, try to find excuses," he said.

Zekri said that the political silence fed radicalization and pushed youths to leave to join extremist and terrorist groups.

"Fundamentalism feeds fundamentalism and it is not surprising that young people, who feel excluded, marginalized and accused of all evils, are radicalized and leave to be killed for free, considering that they have no future in this country," Zekri concluded.
Last Update: Apr 16, 2015 7:49 pm
RELATED TOPICS