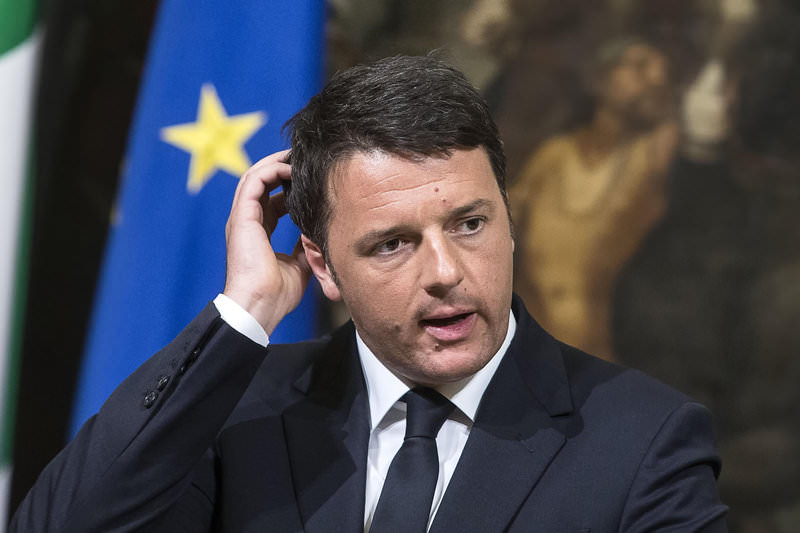 Italian PM Matteo Renzi talks to journalists during a press conference he held after a meeting with his top ministers in an emergency strategy session, in Rome, Sunday, April 19, 2015 (AP Photo)
by Daily Sabah with AFP Apr 19, 2015 12:00 am
European Council President Donald Tusk is considering calling an emergency summit on the refugee crisis after the latest migrant boat tragedy in the Mediterranean, in which 700 people are feared to have died, his spokesman said on Sunday.

Tusk himself tweeted that he was talking to EU leaders, the European Commission and its foreign service on "how to alleviate (the) situation" after a fishing boat capsized overnight off the Libyan coast, killing as many as 700 migrants.

After the consultations, the spokesman said, the former Polish prime minister who now chairs the Council of EU leaders would decide on a possible extraordinary summit.

Italy made a call earlier Sunday for an emergency summit of EU leaders, with Prime Minister Matteo Renzi saying Rome is working "to ensure this meeting can be held by the end of the week".

EU foreign ministers will gather in Luxembourg on Monday at a meeting expected to be devoted to the migrant crisis.

EU commissioner for migration Dimitris Avramopoulos, who was due Monday to visit the EU's two land borders with Africa -- Ceuta and Mellila -- said he was cancelling the trip in order to attend the foreign ministers' meeting.

Spanish Prime Minister Mariano Rajoy on Sunday urged the EU to do more to prevent further loss of life at sea amid a recent spike in the number of people attempting the illegal and dangerous crossing to Europe.

"We have suffered similar tragedies in our country and we know that there is no country in the world, no matter how strong or how many resources it has, that can tackle on its own these events," he told a rally in the Mediterranean city of Alicante.
Last Update: Apr 20, 2015 10:49 am
RELATED TOPICS