EU concerned only with security, not migrants' lives, Amnesty says 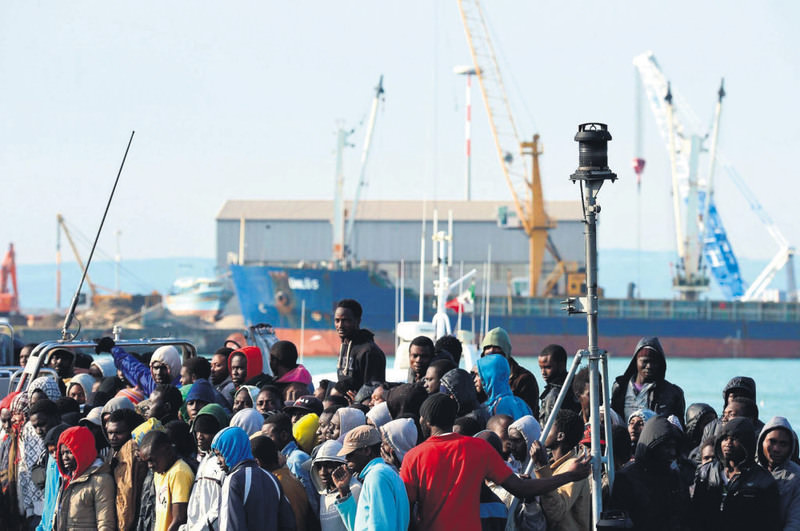 Rescued migrants stand as they disembark from the Italian vessel Guardia di Finanza Denaro at the Sicilian harbor of Catania on April 23.
by Daily Sabah with Wires Apr 24, 2015 12:00 am

The EU migrant plan was criticized by international aid organizations, saying that its response to the migrant crisis prioritizes border security and would not help save lives at sea

"What we witnessed today in Brussels was a face-saving, not a life-saving operation. All the words and resources being thrown at this problem suggest that EU leaders are being serious about saving lives at sea. But the reality is they are still only meeting the problem halfway," said John Dalhuisen, Amnesty International's director for Europe and Central Asia.

"Unless they go the extra mile, migrants and refugees will continue to drown and Europe will have again failed shamefully to deal with this tragedy on its doorstep. If Triton can't be changed, then Triton is not the solution, however many resources one gives it."

"It is not enough to increase EU boats at sea if they remain focused on protecting Europe's borders, rather than the people at sea who are dying trying to get there," said Kenneth Roth, executive director at HRW. "EU leaders should give a clear search-and-rescue mandate to these operations."

The increasing funding for migrant rescue mission Operation Triton would not "address the reality of the search and rescue needs in the Mediterranean unless the operational area is extended to the high seas where most of the deaths occur," Amnesty said. Search and rescue operations to prevent migrants from drowning in the Mediterranean while they try to reach European shores face tightened measures, as the joint EU border protection operation, Operation Triton, has a more limited scope to save migrants from mass drowning, compared to the previous EU policy dubbed Mare Nostrum. Triton, a border control operation, has been criticized for being smaller in budget and scope than Mare Nostrum, which had a search and rescue mandate. As the number of desperate people fleeing poverty, conflict and war attempting to reach Europe by crossing the Mediterranean Sea has been gradually increasing, the new EU policy over sea rescue missions is likely to lead to the death of more migrants.

Strengthening the EU's maritime presence and fighting smuggling networks are on the agenda of EU leaders to resolve the migrant crisis. During Tuesday's meeting, EU leaders agreed to triple funding for the bloc's Mediterranean sea patrols, and drove plans forward for possible military action against smuggling networks at emergency talks in Brussels following a deadly migrant shipwreck. The joint decisions mark a "big step forward for Europe," Italian Prime Minister Matteo Renzi said. For the first time, he said, the bloc is forming a strategic vision on migration.

According to the U.N. refugee agency, over 1,600 migrants died in 2015 while trying to make the crossing. Over 218,000 refugees and migrants arrived in Europe via the Mediterranean in 2014, as indicated by the U.N. More than 110,000 migrants crossed through Libyan territory in 2014 alone, according to the U.N. figures. These numbers have been gradually increasing as hundreds of immigrants hope to reach the European shores of Italy, Malta, Spain, Greece and Cyprus. Over 35,000 migrants have arrived by boat in southern Europe so far since the beginning of this year, according to figures released by the U.N. High Commissioner for Refugees.
Last Update: Apr 25, 2015 2:28 am
RELATED TOPICS