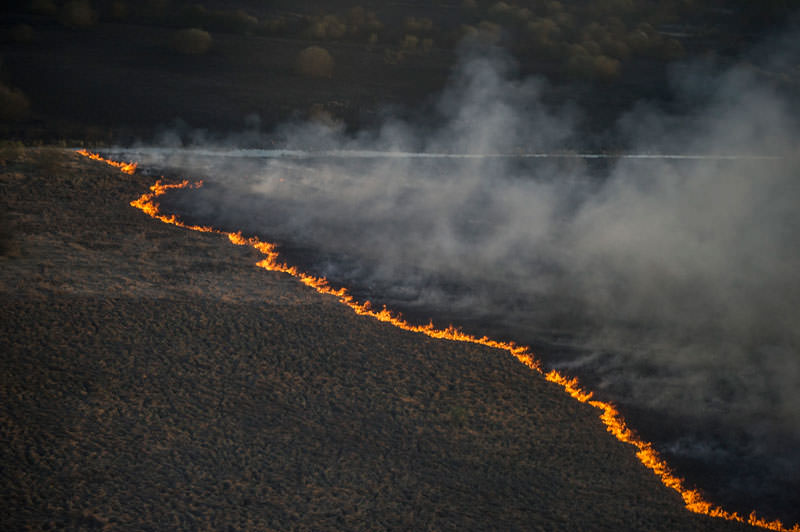 by Associated Press Apr 29, 2015 12:00 am
Fire engulfed a large sector of woods in the exclusion zone around the destroyed Chernobyl nuclear power plant on Tuesday. The fire was the worst in the area for more than two decades, Ukraine's prime minister said.

Arseniy Yatsenyuk said the blaze was under control and had been contained to an area 20 kilometers from the plant.

"The emergency services are actively working there to avoid the spread of the fire," he said.

Officials have said they are pursuing the possibility that the blaze was started intentionally.

It is unclear if the fire has hit parts of the zone heavily contaminated by radiation from the 1986 reactor explosion and fire, but Yatsenyuk said that no change in background radiation levels had been registered.

Security is being tightened around the perimeter of the exclusion zone due to the suspicions of arson, Interior Minister Arsen Avakov said.

"Patrols have been stepped up. National Guard and Interior Ministry units have been placed on high alert," the minister wrote on his Facebook account, which he uses to issue public statements.

Avakov said the risks posed by the fire were intensified by sharp gusts of wind in the early evening, but that the winds died down a few hours later.

A 30-kilometer (18.6-mile) zone around the plant is off-limits to most people except for workers constructing a new shelter to cover the destroyed reactor's building, and to visitors on short trips. The explosion and fire left some sections of the zone heavily contaminated, while other parts were less damaged.