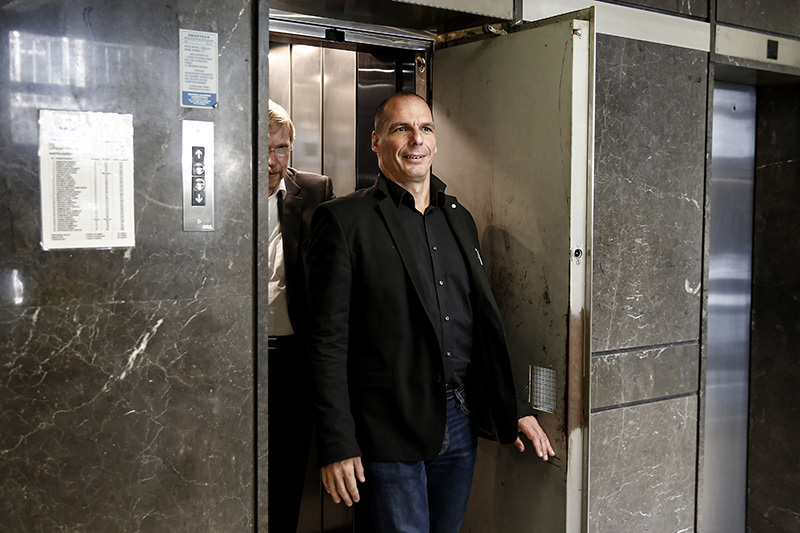 | AP Photo
by French Press Agency - AFP Apr 29, 2015 12:00 am
Greece's Finance Minister Yanis Varoufakis has been attacked by a group called "anarchists" who threw bottles towards him as he was dining with his wife at a restaurant in Athens, reports said on Wednesday.

The standoff between the anarchists and the flamboyant minister, who is battling Greece's creditors over the terms of a critical bailout package, took place on Tuesday evening at a restaurant in the Exarchia district.

Journalist Katerina Akrivopoulou, who spoke to Varoufakis after the incident, said "around ten enraged youths stormed in, shouting things along the lines of 'what are you doing here, this is our area'."

Fearing for her husband's safety, his wife threw her arms around him to protect him from the objects hurled by the youths, the ministry statement said.

Neither the minister nor his wife were injured.

The ministry described the incident as an "attack" but asserted that the group was not actually trying to hurt the couple.

Exarchia is an anarchist stronghold that politicians generally avoid.

Writing on her Facebook page, Akrivopoulou said the group told the 54-year-old motorbike-riding minister "to return to Exarchia when you are no longer a politician".

After leaving the restaurant, Varoufakis said he spoke to the anarchists until tempers calmed.

The maverick former economics professor, who has shaken up the staid world of EU summits by arriving to meetings in rock-star-style leather jackets and untucked shirts, has declined police protection since taking office in January.

His swaggering, abrasive style has annoyed some EU counterparts at meetings to try to end a deadlock over reforms demanded of Athens in return for billions of euros in bailout funds.

European economics commissioner Pierre Moscovici has described Varoufakis as "not always easy" to work with.