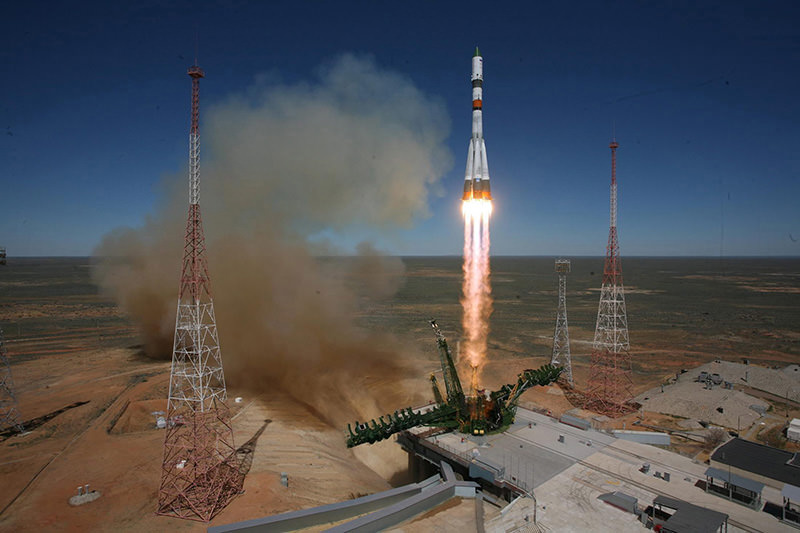 A handout picture released by the press service of the Russian Federal Space Agency Roscosmos shows a Russian Soyuz-2.1a launch vehicle carrying the Progress M-27M cargo ship lifting off on 28 April 2015 (EPA Photo)
by French Press Agency - AFP
Apr 29, 2015 12:00 am
Russia is trying to make contact with an unmanned cargo ship, which was taking supplies to an International Space Station, after communication with it was lost and the ship is plunging back to Earth, an official said on Wednesday.

"It has started descending. It has nowhere else to go," an official familiar with the situation told AFP on condition of anonymity, speaking ahead of an official Russian space agency statement expected later in the day.

"It is clear that absolutely uncontrollable reactions have begun."

The official said the descent likely marked the end of the Progress spacecraft's mission although the Russian authorities will contact it again to make sure everything has been done to rescue it.

"We have scheduled two more communication sessions to soothe our conscience," said the official, adding it was hard to predict when exactly the vessel would fall back to Earth.

A Soyuz rocket carrying the Progress M-27M spacecraft with supplies for the ISS successfully launched on Tuesday but communication with the vessel was lost soon afterwards.

The loss of the Progress supply ship would be the latest embarrassment for Russia's space programme that has been recently hit by a series of mishaps.

Russian officials said earlier on Wednesday that attempts to contact the spacecraft had been unsuccessful, raising fears it could be lost for good.

"There have been no improvements," a mission control spokesman told AFP.

The controllers had opted on Tuesday to change the flight plan and extend the vessel's journey to two days instead of six hours in a bid to fix the glitch.

The mission control spokesman said a decision on the spacecraft's fate would likely be announced later in the day.

"It's the first time that we have such a combination of emergency situations."

The ship had been scheduled to dock with the ISS, where the international crew of six people is awaiting the cargo, on April 30.

The Russian space programme is renowned for having sent the first man into space in 1961 and launching the first sputnik satellite four years earlier, and remains a major source of national pride.

But more recently it has endured a series of setbacks, notably losing expensive satellites and a similar Progress supply ship in 2011.

Shortly after launch, the vessel crashed into Siberia, marking one of Russia's biggest space setbacks.

Deputy prime minister in charge of the aerospace industry, Dmitry Rogozin, who is currently in China, said he was in constant touch with the space agency.

"We're all worrying about our cargo spacecraft," he said on Twitter.

NASA said none of the equipment on board was critical for the US section of the ISS, and that the astronauts have plenty of provisions, enough to last for months.

The Progress was carrying "1,940 pounds (880 kilos) of propellant, 110 pounds of oxygen, 926 pounds of water, and 3,128 pounds of spare parts, supplies and scientific experiment hardware," NASA said.