More than 3,400 migrants rescued in Mediterranean 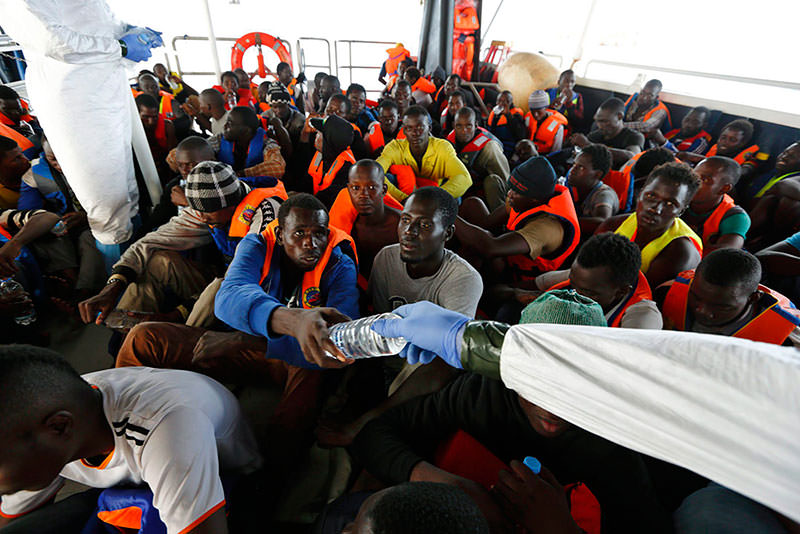 A handout picture made available on 02 May 2015 of 105 refugees rescued from a rubber raft on the 'Phoenix', a ship belonging to the Migrant Offshore Aid Station (MOAS), off the shores of the island of Lampedusa, Italy, 04 October 2014 (EPA Photo)
by Daily Sabah May 03, 2015 12:00 am
More than 3,400 migrants have been rescued at sea, mainly off the coast of Libya, as Europe seeks ways to deal with the flood of people trying to reach its shores following a series of deadly shipwrecks. In Italy, the Coast Guard announced late Saturday that 16 vessels had rescued a total of 3,427 people on Saturday alone in an operation coordinated from their headquarters in Rome.

While they said it was a "very busy day," it was not a record for the Coast Guard, which coordinated the rescue of 3,791 migrants on April 12 and another 2,850 the following day. The French patrol boat Commandant Birot, which was sent to boost EU patrols dealing with the influx of migrant boats in the Mediterranean, picked up 217 people off the coast of Libya.

The migrants, all men, had been aboard three boats, the authorities said, adding that two suspected people smugglers were also caught and would be handed over to Italian police. In addition to the French patrol boat, the rescue operation mobilized four Italian Coast Guard ships, two Italian Navy vessels, two cargo ships, two Italian customs ships and two tugs. Most notably, the Italian Navy said on Twitter that the frigate Bersagliere had rescued 778 migrants, while the patrol boat Vega had picked up another 675.

Some of the rescued migrants were expected to arrive overnight on the Italian island of Lampedusa, the closest to the African coast, while most of the others are expected to arrive in Sicily or southern Italy on Sunday night. According to the Italian coast guard, the French patrol vessel should land its migrants at a port in Calabria. Hundreds of migrants, mostly African but also many Syrians escaping the civil war, land every day on the Italian coast after being rescued by the Italian Navy or Coast Guard.

Europe's only nongovernmental rescue vessel set sail on Saturday from Malta on a six month mission to reduce the number of migrant deaths on the Mediterranean. The MV Phoenix, which last year saved 3,000 lives in just two months, will face an even tougher mission this year because of the spike in migrant crossings, said Martin Xuereb, director of the Migrant Offshore Aid Station (MOAS). MOAS has teamed up with Medecins Sans Frontieres (Doctors Without Borders) to operate the 40-meter-long vessel that is equipped with a state-of-the-art drone that will be used to locate migrant vessels. It is the only private ship engaged in the operation, although the coast guard regularly calls on passing freighters to rescue migrants when no other vessels are close by.