Europe still debating how to deal with migration issue 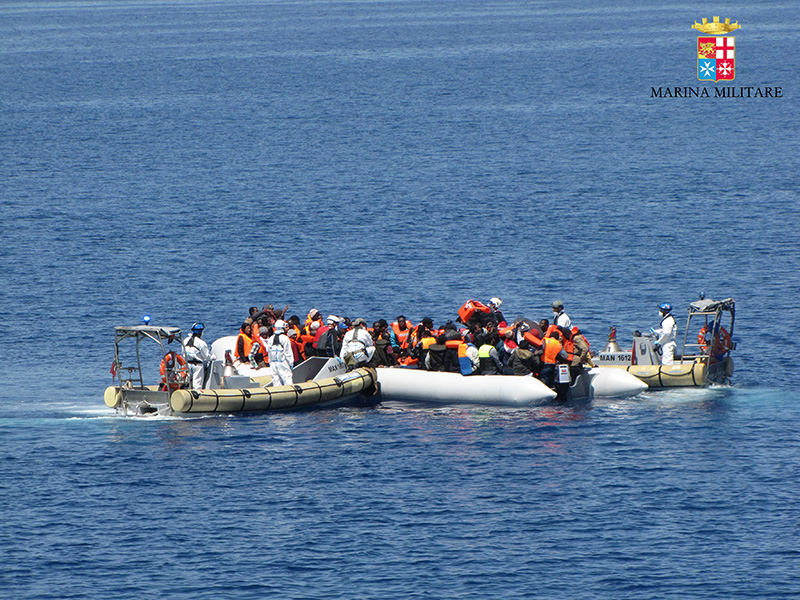 Preventive measures to stop asylum seekers from risking their lives in a dangerous journey to Europe are yet to be applied by the European Union as the number of migrants rescued beginning on the weekend hit 5,800

In the face of a growing number of migrants, the European Union is still indecisive over how to stop mass migration from Libya. The tide of people risking their lives to reach Europe from Africa and the Middle East has not been slowed, as more than 5,800 people were rescued and 10 bodies were recovered off the Libyan coast over the weekend. More than 2,150 of them were rescued on Sunday alone, the Italian Coast Guard reported. However, no joint action has been initiated so far in order to slow the number of migrants expected to make the crossing in the coming weeks.

European leaders are now seeking advice from Australia to stop asylum seeker boats from reaching its shores. Australia is well-known for its policies regarding mass migration from Indonesia. Some of the tactics the Australian government uses under its Operation Sovereign Borders policy to stop the flow of migrants smuggled in boats from Indonesia have been heavily criticized by human rights groups as inhumane toward migrants. "My understanding is that there has been some contact at the official level between Australians and Europeans," Australian Prime Minister Tony Abbott said. "Obviously, Operation Sovereign Borders is an object lesson in how to do the right thing by everyone," he added, referring to Canberra's military-led response to migrants attempting to enter the country by boat. He stressed the operation works "to do the right thing by our people and ultimately do the right thing by poor, misguided people who for all sorts of reasons want a better life but very often end up dead if they succumb to the lure of the people-smugglers."

Strengthening the EU's maritime presence and fighting smuggling networks are on the agenda of EU leaders to resolve the migrant crisis. During the EU leaders' meeting, tripling the funding for the bloc's Mediterranean Sea patrols was agreed on, and they drove plans forward for possible military action against smuggling networks at emergency talks in Brussels following a deadly migrant shipwreck where more than 900 migrants died. The joint decisions mark a "big step forward for Europe," Italian Prime Minister Matteo Renzi said. However, a strategic vision on migration is still yet to be formed. Following the tragic death of 400 migrants in the Mediterranean Sea between April 11 and April 13, many international aid organizations, including the Norwegian Refugee Council and Human Rights Watch, condemned the existing European mechanisms and operations. Such organizations emphasized these operations are not sufficient to reduce the risks and danger or prevent further tragedies at sea. They also called on European countries to take a humanitarian initiative by implementing a Mediterranean-wide search and rescue operation.

Europe is one of the most popular destinations for migrants, refugees and asylum seekers. In terms of migratory flows, Spain, Italy and Greece serve as the doorstep to Europe, as many of them attempt to reach countries in Western Europe. The International Organization for Migration (IOM) reported "for all of April 2014, a total of 15,682 migrants sailing from Libya and Egypt arrived in Italy – a total that may be passed in the next three days. Through the first four months of 2014, Italy's Ministry of the Interior reported 26,644 migrant arrivals. By April 27, the IOM has counted 25,703 migrants. The organization expects this to surpass 2014's year-to-date total in the coming days."

"This [April], we have witnessed an unprecedented number of fatalities at sea," said Federico Soda, IOM's Regional Director for the Mediterranean. "Among the arrivals, there are a growing number of sub-Saharan migrants. Some of them always had the goal of reaching Europe. Others decided to risk their lives to cross the Mediterranean after having lived for months or even years in Libya, a country that has become too dangerous, particularly for labor migrants from West Africa."
Last Update: May 04, 2015 6:16 pm
RELATED TOPICS