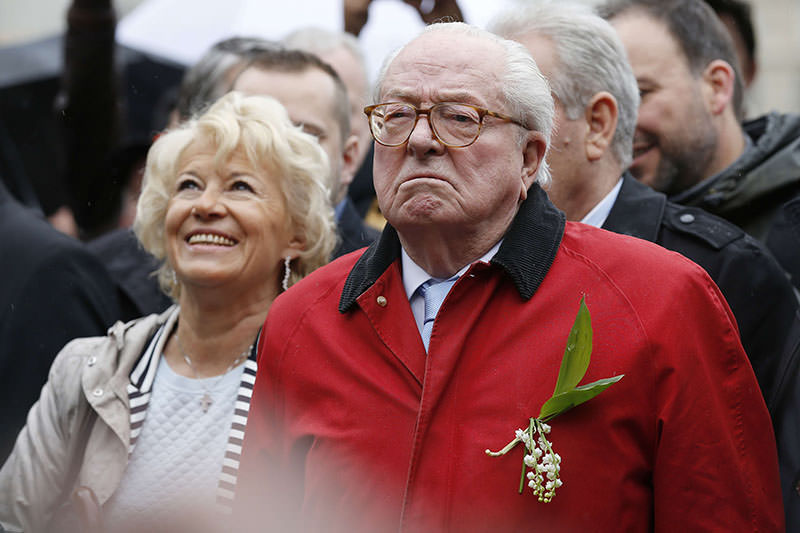 | AFP Photo
by Daily Sabah with AFP May 04, 2015 12:00 am
The crisis grows in France's far-right party National Front (FN) between the party founder, Jean-Marie Le Pen and his daughter and the party leader, Marine Len Pen after a bitter public dispute over controversial racist remarks. The younger Le Pen has been actively trying to distance the party from its racist and anti-Semitic image as she plans her bid for the next French presidential election in 2017.

Furious at his suspension, and the threat of losing his title of honorary party president, the octogenarian turned on his daughter, accusing her of "betrayal" and saying he no longer wanted to see her win the 2017 elections. He said his suspension was a "criminal act," vowed to "disown" his daughter and ordered her to "give up her name." "If such moral principles should govern the French state, that would be scandalous," he said in a radio interview.

The 86-year-old, who founded the party in 1972 and led it until 2011, was suspended Monday over comments in which he dismissed Nazi gas chambers as a "detail of the history of the Second World War". He also claimed that France has to get along with Russia to save the "white world." Following Le Pen's racist remarks, Marine decided enough was enough and openly split with her father, saying he was committing "political suicide." The relationship between Marine and her father has been particularly rocky in recent months. Six months ago, she stormed out of her father's house after his Doberman dog savaged her Bengal cat to death.

The far-right party, FN has gained significant political breakthroughs in French politics. Le Pen's National Front won the European Parliament election, held in May 2014, with 25 percent of the vote while increasing their number of seats to 24 of France's 74 seats in Strasbourg. During the Senate elections held in September 2014, FN secured two seats in France's upper house. Strong showings from the right parties in the municipal, European, senate and local elections are a sign of growing public discontent with the President François Hollande's socialist government.

The rise of the ideological right in French politics demonstrates that the increasing disenchantment among French people with government policies toward currency and debt crises, recession and austerity has led many Europeans to adopt far-right views. The unprecedented threat of home-grown militants linked to the Islamic State of Iraq and al-Sham (ISIS) has also led to growing hatred and intolerance toward migrant communities while further fuelling Islamophobia and French nationalism, Euroskepticism.