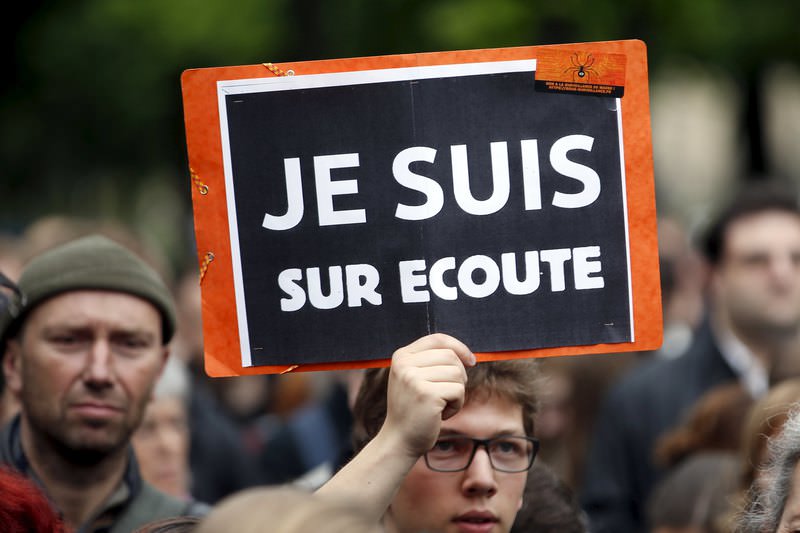 A protester holds up a placard which reads ,I know they tap my phones , as he demonstrates against the surveillance bill a day ahead of its vote in parliament in Paris May 4, 2015 (Reuters Photo)
by Daily Sabah May 05, 2015 12:00 am

While the mass surveillance ‘Patriot Act’ was approved by the French parliament, a French mayor confessed to keeping files on Muslim students, revealing an act of ethnic and religious profiling

With a new surveillance act being approved, France has been shaken by a scandal about ethnic and racial profiling against Muslims, an indication of human rights abuse, perpetrated by a French mayor. The far right mayor of the town of Beziers, Robert Menard, in southern France, confessed that he kept files on the number of Muslim students in his town, Le Monde reported on Tuesday. Speaking at the TV channel France 2 on Monday, he had statistical information on the religious affiliation of students enrolled in schools in his town, noting that 64.6 percent of them were Muslims. Keeping personal information and files is prohibited by the 1978 law. The illegal act of filing Muslim students came under fire from French political leaders.

As part of counterterrorism efforts, vast new surveillance rules in the "French Patriotic Act" were approved by French deputies on Tuesday. It will also pass a Senate vote and a constitutional review. The bill suggests that the French authorities would intercept all online communication, secretly hack computers and mobile devices and spy on emails and texts of anyone they "suspect," fit monitors in keyboards and see everything a person types on their computer or mobile devise, including private messages. It would also ascertain the location and identification of particular people through using "proximity sensors" in field surveillance. France's attempt to monitor communications was heavily criticized by many rights groups as fundamental human rights are likely to be violated by the French government for the sake of national security.
Amnesty International criticized the new bill, saying that France would be "tak[ing] one step closer to becoming a surveillance state." The bill dramatically expands the French government's power to spy on what people do online and offline, as it leaves the door open to basic human rights abuses, the human rights watchdog said.

In the aftermath of the deadly attack on the French satirical magazine Charlie Hebdo, France has still been on high alert after receiving repeated threats from militant groups. Muslims in France have been subjected to violent attacks due to an increase in suspicion and negative sentiments toward the French Muslim community. Reports of attacks on mosques and Muslim-run businesses in various places in France have led many French Muslims to fear rising Islamophobia. France has suffered a six-fold rise in Islamophobic attacks, counting 222 violent anti-Muslim attacks in the first quarter of this year, according to figures released by the French Interior Ministry.

The threat posed by many French militants affiliated with the radical Islamic State of Iraq and al-Sham (ISIS) has led the French government to take extraordinary measures in order to provide security and prevent terrorist attacks. After the deadly Paris massacre, France has bolstered security across the country with the deployment of thousands of troops. The misrepresentation of Islam by militant groups like the Islamic State of Iraq and al-Sham (ISIS), al-Qaida, Boko Haram and the Taliban trigger more fear and anti-Muslim sentiments in France. As these militant groups have carried out violent attacks and killed many, French authorities are more inclined to take precautionary security measures.
Last Update: May 06, 2015 9:57 pm
RELATED TOPICS