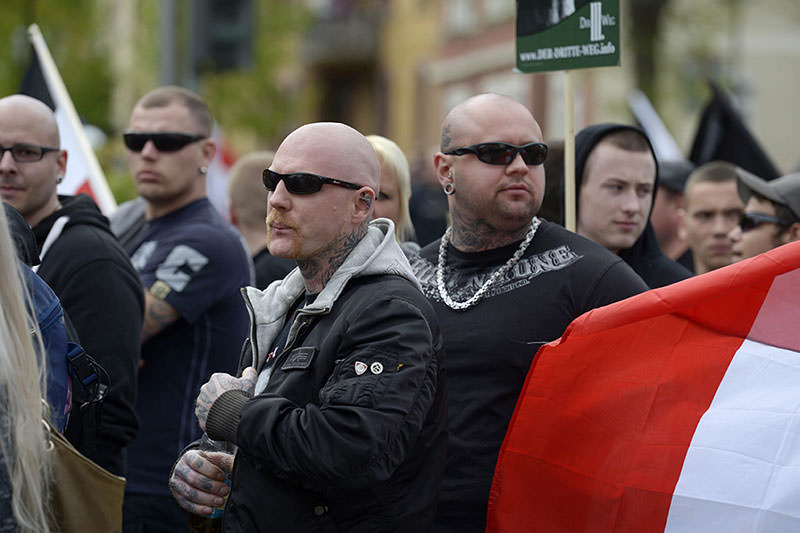 Participants in a march organized by the right-wing extremist group 'Der dritte Weg' (lit. the third way) walk through Saalfeld, Germany, 01 May 2015 (EPA Photo)
by May 06, 2015 12:00 am
German police have detained four people suspected of setting up a new right-wing extremist group calling itself the "Old School Society" with the aim of carrying out bomb attacks on mosques, Salafist Muslims and shelters for asylum-seekers.

"Investigations show the group's goal was to carry out attacks in Germany in small groups against notable Salafists, mosques and asylum-seekers' shelters," said the German public prosecutors' office in a statement.

"To this end, from what we know so far the four people detained obtained explosives for possible terrorist attacks by the group," said prosecutors, adding that it was not yet clear whether they "already had specific targets or dates in mind".

They identified the four - all of them German citizens - as 56-year-old Andreas H., who was "president" of the group, 39-year-old "vice-president" Markus W., 22-year-old Denise Vanessa G. and 47-year-old Olaf O. German authorities only identify suspects by their first names and initials.

In 2011, Germany was shocked by revelations that a small right-wing cell, the National Socialist Underground (NSU), had carried out the murders of nine immigrants and a policewoman, as well as bombings and bank robberies. Security services and police had failed for a decade to detect the NSU's existence.

Two members committed suicide after a bank robbery and a third suspect, Beate Zschaepe, is now on trial.