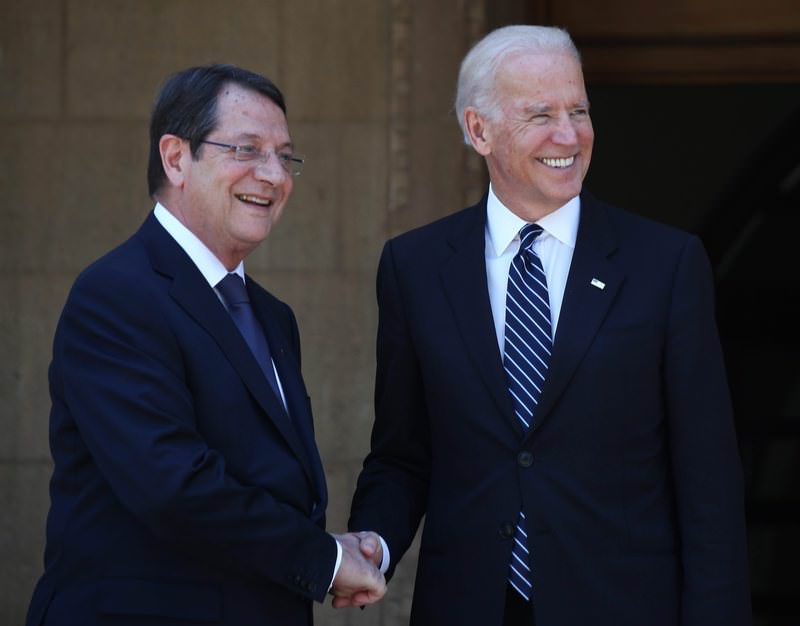 by Daily Sabah May 07, 2015 12:00 am
U.S. Vice President Joe Biden has spoken with Greek Cypriot leader Nicos Anastasiades on Wednesday and advised him to seize the opportunity to work with newly-elected Turkish Cypriot leader Mustafa Akıncı.

According to a statement released by the White House, Biden told Anastasiades that the two parties should conclude a settlement as soon as possible to reunify the island as a bizonal, bicommunal federation, which can be beneficial for all Cypriots.

Peace talks between the Greek Cypriot administration and the Turkish Cypriot government have been on hold since October.

Turkish Cypriots and Greek Cypriots have tried to find a comprehensive settlement to renew their partnership since the island's joint government collapsed in 1963.

The island has been divided into Turkish Cypriot government in the northern third and Greek Cypriot administration in the southern two-thirds after a 1974 military coup by Greece was followed by the intervention of Turkey as a guarantor power in Cyprus.

Peace talks were unilaterally suspended by the Greek Cypriot side last October after Turkey issued a navigational telex on behalf of the Turkish Republic of Northern Cyprus for seismic research off the coast of Cyprus.

However, the Greek Cypriot administration suspended talks over the divided island on October 7, 2014 after Turkey sent a ship to monitor an oil-and-gas exploration mission off the coast of Cyprus.
Last Update: May 07, 2015 10:38 am
RELATED TOPICS