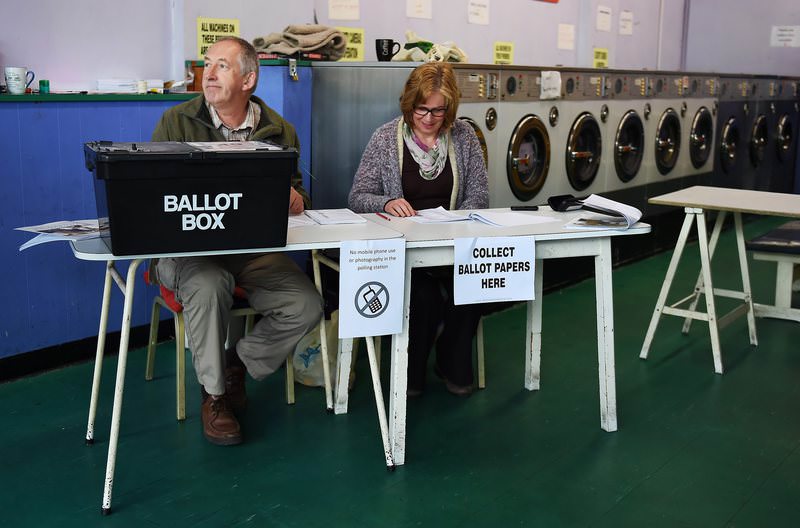 by Compiled from Wire Services May 08, 2015 12:00 am
The center-right Conservative Party is on course to win the U.K. general election with an overall majority on Friday.

Exit polls released after voting closed initially predicted the Conservatives would win 316 seats - seven seats short of the 326 necessary for a majority.

The BBC, however, have updated their forecast, predicting 325 seats for the Conservatives.

The Conservatives are winning seats off both Labour and the Liberal Democrats, the latter of which they entered into coalition with in 2010.

The biggest surge was for the separatist Scottish National Party, which was expected to take all but one of the seats in Scotland.

Cameron's Conservatives and Ed Miliband's Labour Party had both seen support fall as voters turned elsewhere chiefly to the Scottish Nationalists, who will dominate north of the border, and the anti-immigrant U.K. Independence Party. UKIP ran third in opinion polls but Britain's electoral system means it can win at most a handful of seats.

Across this nation of 64 million people, voters streamed to schools, churches and even some pubs for a say in their country's future.

"This is the most exciting election I can remember," said Lesley Milne, 48, from Glasgow, who supports the Scottish National Party. "It's time to shake up the politicians in London and the SNP are the people to do it."

The carefully stage-managed campaign lacked impromptu drama. But television debate appearances in which the public put questions directly to the politicians made plain that many distrust promises to safeguard the economy, protect the National Health Service from severe cutbacks and control the number of migrants from the European Union.

Cameron and Miliband were both up early to vote. The prime minister voted in his Oxfordshire constituency with his wife, Samantha, while Miliband cast his ballot alongside his wife, Justine, in northern England. Liberal Democrat leader Nick Clegg, the deputy prime minister in Cameron's government, walked hand-in-hand with his wife Miriam to the polls in the city of Sheffield.

Britain's economy recovering after years of turmoil that followed the 2008 financial crisis was at the core of many voters' concerns.

In one of London's poorest communities, Whitechapel, home to a large ethnic minority population, voters struggling in the wake of the worst recession since the 1930s wanted a change in leadership.

"The first priority is the economy, the second one is creating more jobs, and the third is living expenses they're going higher and higher," said Shariq ul-Islam, 24, a student from Whitechapel's large Bangladeshi community.

Just a few minutes away is the City of London, the traditional financial district where many bankers earn salaries that their Whitechapel neighbors can only dream of.

Here, Christopher Gardner, a 34-year-old finance industry official, had trust in the Conservatives.

"There are some issues that have been caused by austerity previously they're the only people that I'm confident will resolve that," he said.

In Scotland, voters turned out in droves, with lines at polling stations and a large turnout in the capital, Edinburgh.

About 50 million people were registered to vote, and turnout appeared to be high across the United Kingdom's four parts England, Scotland, Wales and Northern Ireland. There was an excitement about taking part if only for the pleasure of being involved in a big national event.

Many used social media to spread the news that they had voted. Facebook said that for the first time in a British general election, users have access to the "I'm a Voter" button. More than 1.3 million people had used it as of Thursday morning.

Dogs and other creatures also featured on polling day. The hashtag #DogsAtPollingStations was one of the top 10 trends in Britain on Twitter, where many people posted fun photos of pups they took to or spotted at polling stops.

It's not just canines that offered a talking point on election day, when British broadcasters are banned from reporting on political news until polls close.

Denmark's prime minister also popped into a British polling station though she wasn't voting. Helle Thorning-Schmidt was in South Wales to support her husband, Stephen Kinnock, a Labour Party candidate for the constituency of Aberavon.

A video posted on YouTube showed the couple emerging from a polling station after Kinnock, the son of former Labour leader Neil Kinnock, cast his vote.

Asked how it felt to have a husband sitting in the parliament of another country, Thorning-Schmidt said she was happy for him because he worked hard campaigning.

"I don't know anyone who works as hard as Stephen," she said. "Today I am simply proud."

Asked how they would celebrate his win, she said: "Let's wait and see how things go today, but we will be very tense."