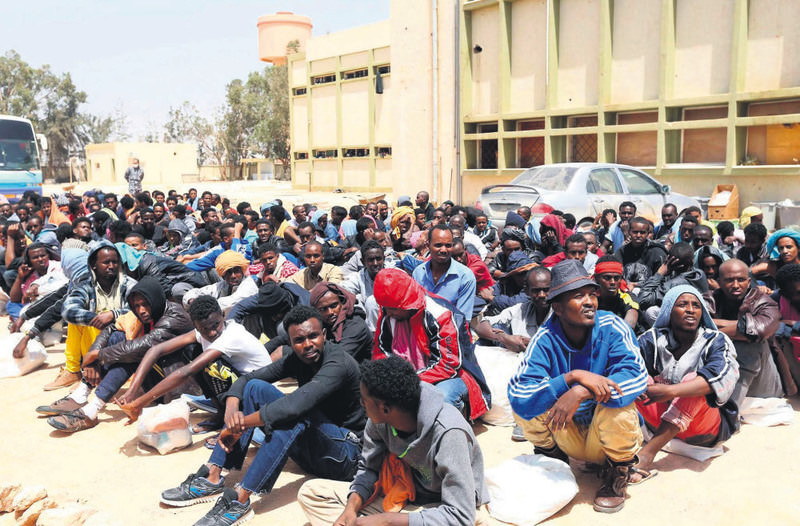 African Migrants sit in a center for illegal migrants in the al-Karem district in Misrata eastern of Tripoli, Libya on May 9, waiting to be transported to a different detention center.
by Daily Sabah with AFP May 11, 2015 12:00 am

EU is urging the U.N. Security Council to approve a military operation to deter human smugglers in Libya as the bloc is split over a new migrant quota plan in which the U.K. immediately refused to participate

As the Mediterranean migrant crisis grows and a record number of migrants have perished at sea, the EU has taken action by proposing two new measures to stop migrant tragedies – a U.N.-mandated gunship plan and a migrant quota that forces member states to share the burden. However, the EU is mulling over how best to respond as eurosceptic and nationalist parties capitalizing on public unease over increased immigration have gained considerable support from European societies. The U.N. does not consider a military operation as a feasible option to end the tragedy in the Mediterranean. U.N. Secretary-General Ban Ki-moon welcomed the EU's increased efforts to find a solution to the problem, underscoring the need for "a global approach that takes into account the roots of the problem and the security and human rights of migrants and refugees such as having immigration channels that are legal and regular." In addition, Russia, which has veto power as a permanent member of the U.N. Security Council, is strongly opposed to any military action.

The first rejection of the EU's migrant response came from the U.K., which favors deploying gunships to tackle trafficking gangs. "The U.K. has a proud history of offering asylum to those who need it most, but we do not believe that a mandatory system of resettlement is the answer," a British government spokesperson said. "[The U.K.] will oppose any EU Commission proposals to introduce a non-voluntary quota." The U.K. had refused to participate earlier in rescue missions to save migrants attempting the dangerous sea crossing. The denial came on the basis that such a mission would create a pull factor for illegal immigration while encouraging more migrants to leave their home countries to live in the better conditions that exist in the U.K.

High Representative of the EU for Foreign Affairs and Security policy Federica Mogherini has led from the front to goad the EU into action after more than 5,000 refugees drowned off the 28-nation bloc's southern shores in the past 18 months as they seek safety and a new life in Europe. "I am ashamed that Europe only wakes up when it is confronted by the dead," she said recently. Mogherini was also tasked with drawing up a list of military options, including action "to capture and destroy the smugglers' vessels," on the key condition that it should be in accordance with international law. Normally that would require an agreement with the government concerned, but Libya is in chaos as rival factions fight for control of the oil-rich country, meaning the EU must obtain U.N. approval to establish a clear legal basis for any military operation.

However, the EU's plan to seek and destroy the boats used by human smugglers to ferry migrants from the Libyan coast to southern European shores would result in some diplomatic problems between Libya and the EU. Libya's territorial waters would be used by military vessels sailing under international flags, according to the drafted plan. As the drafted text suggested, it would allow EU navies to board boats in international waters in the Mediterranean to stop human smugglers, but they would not intervene before they leave the Libyan coast. Some believe they can act without a U.N. mandate against ships that fly no flag, which enjoy less protection under the law of the sea. But they would need the U.N.'s approval to go into Libya's territorial waters.

European Commission President Jean-Claude Juncker is due on Wednesday to present a new migration policy plan that includes a provision that distributes the migrants more fairly across the bloc. "The EU needs a permanent system for sharing the responsibility for large numbers of refugees and asylum seekers among member states," a draft proposal by the European Commission seen by Agence France-Presse said. Diplomatic sources said Juncker may also fix at 20,000 an initial EU-wide quota for refugees despite Britain insisting this should be done only on a voluntary basis after opposing a figure of 5,000 proposed at last month's summit.

"Juncker wants a required quota of refugees, but this is practically seen as a declaration of war" by certain member states, one top European official said. For some member states, taking in more migrants only makes the problem worse, arguing that it attracts more migrants into risking their lives on the perilous Mediterranean crossing. For others such as Germany, there has to be a humanitarian response to the disaster and the best way to ease the EU problem is to spread the refugees more fairly between member states.

Because of the mounting death toll, EU leaders agreed to adopt a 10-point plan to tackle illegal migration, aiming to confront the migration crisis off its coasts by committing more money for search and rescue missions and to extend their scope with more effective maritime operations. Considering the sharp increase in the number of migrants trying to reach Europe's border, EU policies on migrants have been accused of undermining the value of human life and imposing strict measures over search and rescue operations.
Last Update: May 12, 2015 10:38 am
RELATED TOPICS