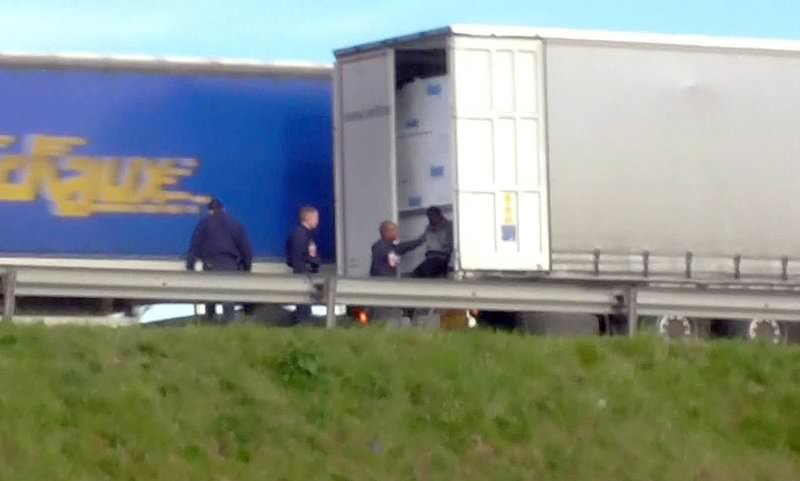 
A shocking video showing Calais police officers violently pulling and kicking migrants who hope to cross over to Britain has sparked an inquiry over French police brutality of migrants. The amateur footage shows officers repeatedly beating and kicking migrants who had been hiding in trucks en route to Britain, hoping to secure a better life across the English Channel. The officers also use tear gas to immobilize some of their targets and force others down onto the ground with their knees. Human Rights Watch condemned police abuse of migrants in Calais and the French government's slow response to their poor living conditions. The video was released by the Calais Migrant Solidarity group on May 5.

The human rights watchdog reports police harassment of migrants in Calais and criticized the strengthening resistance against the border policy. Due to the border policy applied in Calais, uncountable deaths have been reported to the border there so far. "These borders kill! One death is too many!" the group said while condemning police brutality. The watchdog is keeping a list of deaths even though it is unable provide an accurate count of how many migrants have died at the border. Lately, an Ethiopian man, 28, reportedly died on Feb. 14. At least 16 people have been reported dead at the Calais border.

A report titled, "Calais: This border kills. Documented police violence, June 2009 to June 2011," details "the violent, even deadly, repression of refugees in Calais at the hands of the police and other apparatus of the French State." The use of direct physical force, raids and attacks on shelters, food, water, sleep and dignity are highlighted in the report. "The repression in Calais is systematic, involving actors from bottom to top, from minor officials and frontline police to the highest authorities, whether they actively participate or merely look away in silence. Brutality and harassment in Calais are deliberate weapons used in the service of French, British and European immigration policy. The idea is a simple one; drive refugees away from the border by making their lives unbearable," the report says.

As only a small number of refugees are eligible to enter European countries, the ones that can find shelter suffer from poor humanitarian conditions in a new camp built in the northern French city of Calais. An 18-hectare wasteland in the French port city was turned into a camp for as many as 2,500 asylum seekers. Hundreds of migrants have been waiting to be relocated by French authorities in the site, dubbed "the New Jungle," where there is no access to basic services. Human Rights Watch earlier condemned continuing police abuse of migrants in Calais and the French government's slow response to their poor living conditions. Most migrants come from the East African countries of Eritrea, Ethiopia and Sudan and war-torn Syria, intending to cross the English Channel and seek asylum in the U.K.
Last Update: May 13, 2015 3:27 pm
RELATED TOPICS