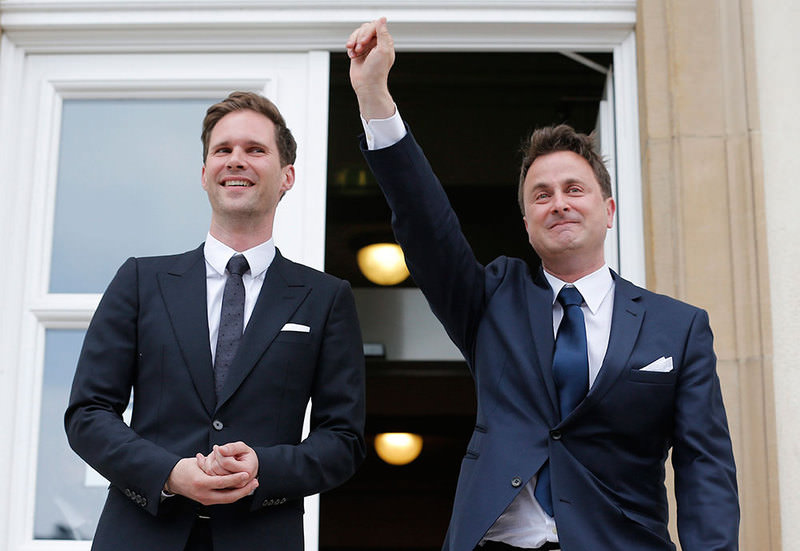 by Daily Sabah May 17, 2015 12:00 am
Luxembourg's first gay prime minister Xavier Bettel married his long-time partner Gauthier Destenay on Friday, becoming the first European Union leader to be in a same-sex marriage.

Attending the wedding ceremony held in Luxembourg, Belgium's Prime Minister Charles Michel said that he came for his "mate's wedding" and that he wanted to be there for him in this "big moment".

Approximately 500 guests attended the wedding, including friends and family. It was reported that press photographers had been banned to keep everything private.

Luxembourg's parliament approved same-sex marriage in June 2014, and weddings have been taking place since then. On the matter, Bettel's broadcaster friend Stéphane Bern said that "This wedding will give an important message to Europe which lately homophobia has been on the rise again." and added that "the symbolism's very strong".

Announcing in August that he would wed his partner since 2010, Bettel said that Destenay had been the one to propose and that he gladly said "yes".

Becoming the ninth EU legislature to lift a ban on same-sex marriage, Luxembourg's parliament passed a bill just two months ago stating that "people of the same-sex could apply for adoption in Luxembourg."

Five years ago Johanna Sigurdardottir of Iceland had also made a same-sex marriage, becoming the first serving leader in the world to do so.