Lithuanian power grid has dark secret buried in Soviet past 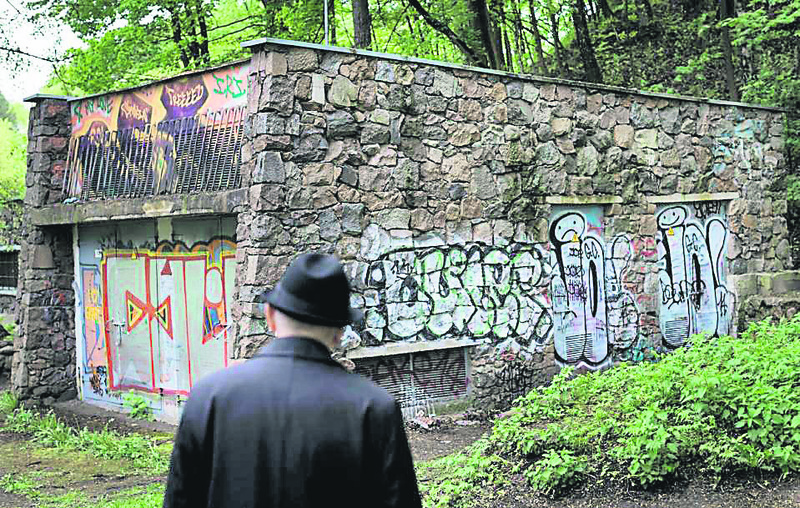 by Associated Press
May 19, 2015 12:00 am
Giedrius Sakalauskas always thought there was something strange about the graffiti-sprayed, bunker-like structure in a leafy area outside the center of Vilnius. Why build an electrical substation with granite blocks instead of regular bricks? When he examined the building more carefully this month, he made a chilling discovery: Dozens of stones had inscriptions in Hebrew or Yiddish. "I touched the stones and I realized that they're really gravestones," Sakalauskas told The Associated Press. And he had strong hunch about where they came from: Across the street there used to be a Jewish cemetery that was demolished in the 1960s when Lithuania was part of the Soviet Union. Sakalauskas posted pictures of his discovery on social media, setting off an emotional discussion about a dark chapter in Lithuania's history that didn't end when a Nazi occupation was replaced by a Soviet one in 1944.

Lithuania's once-vibrant Jewish community was nearly annihilated by the Nazis and the few who survived found little sympathy from their new communist rulers. "Hitler wanted to destroy Jews physically," said Simonas Gurevicius, whose family escaped the Holocaust by fleeing to Russia and returned to Lithuania after the war. "Stalin came, and he wanted to destroy the whole memory of the Jewish people, making sure that nothing will stay." The etchings on the substation are hard to spot unless you know what you are looking for. They're only visible in the gaps where the slabs overlay each other. Showing the site to AP journalists, Gurevicius ran his fingers softly over the letters. "For sure, this is a very sad feeling. It's difficult to read now," he said. Archaeologists confirmed this week that the electrical substation was built with tombstones pilfered from a Jewish cemetery.

Vilinius Mayor Remigijus Simasius told the AP he's already asked the utility companies that own the substation, which feeds electricity to thousands of homes, to find a way to move them to a "proper resting place." The discovery raised uncomfortable questions over how many other structures were built with recycled Jewish tombstones and why the issue is gaining attention only now, 25 years after Lithuania declared independence.

The substation is not the first example. In the 1990s, authorities removed steps leading up to the Tauro hill, one of the highest points in Vilnius, after finding out they were made with stones taken from a Jewish graveyard. The mayor said two other cases are being investigated: the steps leading up to the Reformed Evangelical Church in Vilnius — which was turned into a movie theater by the communists — and a wall outside a high school in the city. "This Soviet-era legacy is a disgrace for our city," Simasius said. "Monuments must be respected. We are talking to the Jewish community to find a proper solution." The issue has touched a raw nerve in a country that has been accused of not confronting the role some Lithuanians played in killing Jews during the 1941-44 Nazi occupation. More than 90 percent of Lithuania's prewar Jewish population of 240,000 was killed.

With Jewish life all but eradicated from Vilnius, Jewish cemeteries were seen as "easily accessible and free building material" during the Soviet era, said Jurgita Verbickiene, a historian at Vilnius University.

Ethnic and religious groups were repressed along with political dissidents amid Moscow's efforts to unite the vast empire under the banner of communism. In the Soviet Union there were no Jews because there was just one people — the Soviet people — explained Rachel Kostanian, deputy director of the Jewish State Museum in Vilnius. "It was a friendship between the Lithuanians, Latvians, Ukrainians, Russians, et cetera," she said. "The Jews were among the et cetera."
Last Update: May 19, 2015 11:05 pm