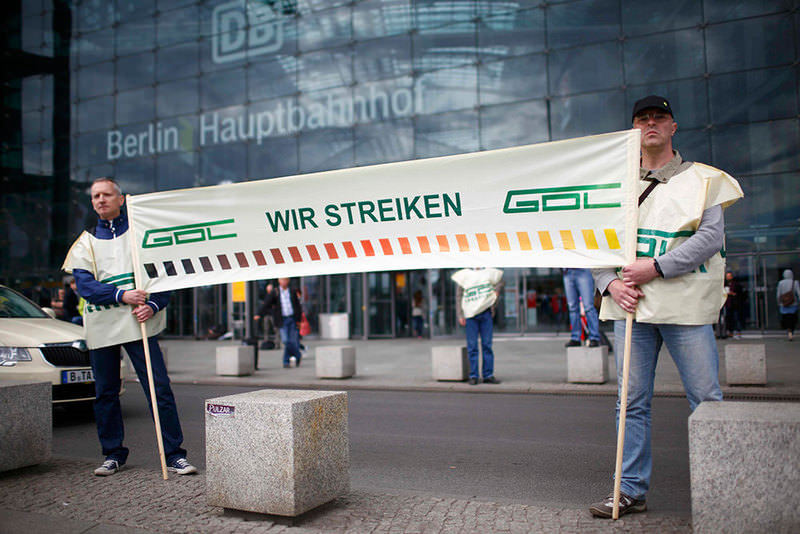 by May 19, 2015 12:00 am
Germany braced for fresh railway chaos from Tuesday after train drivers called a new strike in a bitter labor dispute, warning the open-ended walkout would last at least one week.

The industrial action, the ninth in the protracted dispute, will hit freight trains from 1300 GMT Tuesday and passenger services from 0000 GMT Wednesday.

It is the latest flareup in a battle over wages, work hours and negotiating rights between the small GdL union and national rail operator Deutsche Bahn (DB).

In early May the union staged a nearly week-long walkout, the longest in DB's history, which industry groups estimated cost Europe's top economy almost half a billion euros ($550 million).

"You can assume that this strike will last a little longer" than the last stoppage, union leader Claus Weselsky told a press conference.

That means it is certain to hit passengers over the coming long weekend marking the Christian Pentecost holiday, fuelling public anger which top-circulation Bild daily expressed in the headline "Strike Disgrace".

The GdL, which represents some 20,000 train drivers, is demanding a wage rise and shorter work hours as well as the right to represent other rail workers such as conductors and restaurant carriage staff.

That demand is effectively a turf war with the larger railway union EVG, which has more than 200,000 members, and which is now involved in separate, less heated, wage negotiations with DB.

After weekend talks between the GdL and Deutsche Bahn again ended badly, the union on Monday announced the latest strike.

Weselsky said the action was open-ended and that the union would give the traveling public 48 hours advance notice before train drivers return to work.