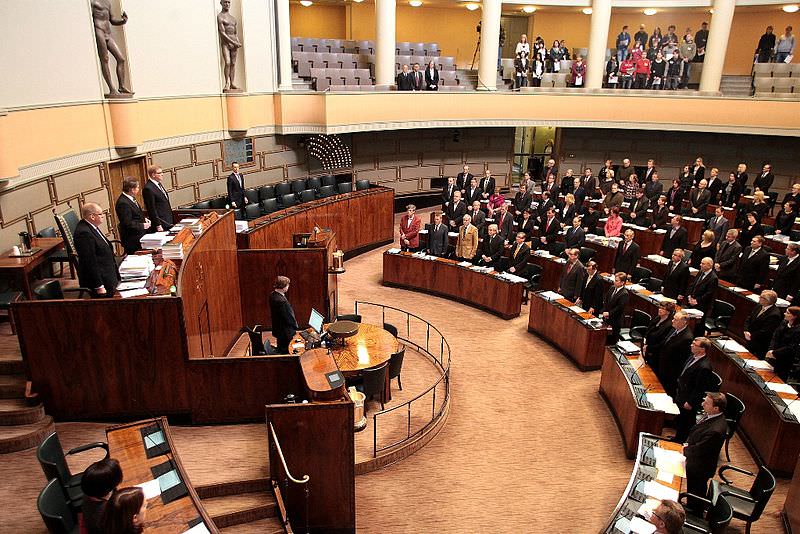 The members of the Parliament prayed in silence for the victims of Tohoku earthquake and tsunami at the Parliament House in Helsinki City, Uusimaa Region on March 15, 2011 (Flickr - Photo Sharing)
by Daily Sabah May 22, 2015 12:00 am
Finland has informed its 900,000 military reservists of their roles "in the event of war" amid rising tension with neighboring Russia, according to various media outlets.

The Finnish army dispatched letters earlier this month to "900,000 former conscripts in the armed forces, including to Finns living abroad," informing them of their responsibilities should there be a "crisis situation," the British daily The Telegraph wrote on Thursday.

The letters sent to reservists signalize Finland's getting ready should a war start between with Russia, according to experts. Europe says its order has been shaken in the last 18 months by Russia's annexation of Crimea and fighting in eastern Ukraine.

Finland, with its 5.5 million population, is also vulnerable to what Europe sees as an "aggression" by Russia and has substantial reasons to be afraid. The Soviet Union had invaded the country in 1939, and before that, it was part of the Russian empire for more than 100 years.

Meanwhile, the Finnish government reportedly denies that the dispatched letters are linked to Russia, saying that they were result of a plan which had already started two years ago, according to The Telegraph.

"The reservist letter is associated with our intention to develop communications with our reservists, and not the prevailing security situation," Mika Kalliomaa, a spokesman for the Finnish Defense Forces, reportedly said. The letters were reportedly dispatched to make sure that the army had the right contact details of the reservists.

The letters being dated before Russia's seizure of Crimea, however, do not cross out the possibility that Finland was worried about Russia's intentions all along, suspicious of an invasion beforehand.

The Finnish military fired in April warning shots at a suspected submarine in waters near Helsinki. The Finish government did not say whether Russia was involved in the incident, but amid growing tensions between the two countries, eyes were turned onto Moscow.