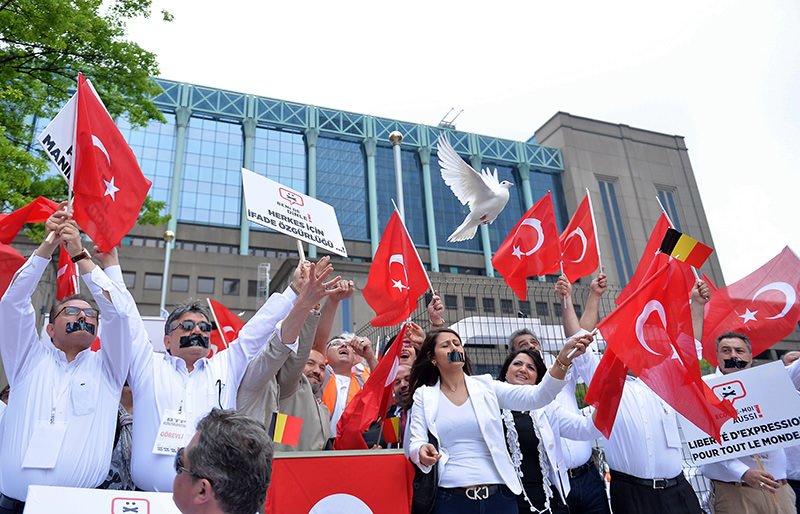 | AA Photo
by Anadolu Agency May 23, 2015 12:00 am
Thousands of Turkish nationals gathered in Brussels on Saturday to protest against what they called restriction on freedom of expression with regards to the 1915 events concerning Armenians.

In a rally event called "Listen to me also", around 3,000 Turkish nationals gathered dressed in white with black tape on their mouth. They protested the motion that parliamentarians from various countries have voted to determine what is or what is not a genocide - in this case concerning the Armenian deaths in 1915 - instead of historians.

One of the protesters, Muhammet Yıldırım said: "Although freedom of expression is a constitutional right in Belgium, there is intolerance against a different view of the 1915 events."

The protest comes more than a month after the European parliament adopted on April 15 a resolution recognizing the 1915 events affecting Armenians as a "genocide".

The protesters, some of which released white doves, also called for an end to erecting monuments that, they say, incite hatred and create divisions within society. A monument commemorating the events of 1915 was erected in the Belgian province of Mechelen on April 21.

Turkey and Armenia disagree on what happened during the events between 1915 and 1923. Armenia says that 1.5 million people were deliberately killed and Turkey says the deaths were a result of relocations and civil strife.