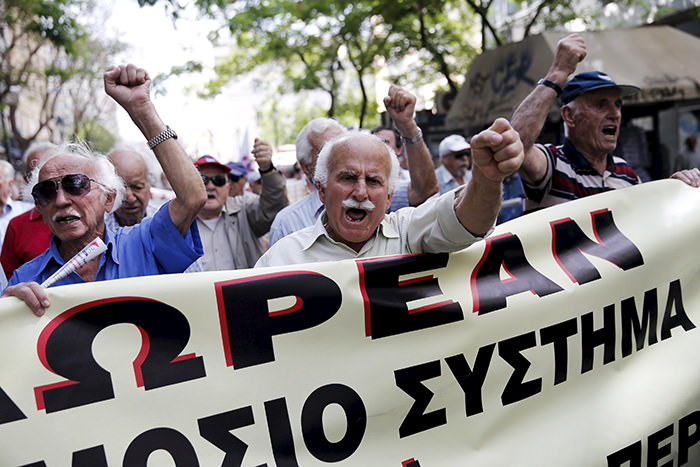 Greek pensioners shout slogans during a demonstration for better healthcare in Athens May 20, 2015 (Reuters Photo)
by Daily Sabah with AA May 23, 2015 12:00 am
The ongoing financial crisis and the austeriy measures taken by the Greek government has almost stopped the country's medical services, which puts citizens in danger, said the Greek Health Minister Panayotis Kurublis during a briefing in the parliament.

The country needs to modernize its health system and make the necessary structural reforms in hospitals and Greece's National Organization for the Provision of Healthcare Services (EOPYY), Kurublis added. The lack of financial support to hospital by the EOPYY has indebted the organization to hospital with a payment of 4,4 billion Euros.

The Greek media has reported that due to lack of stable operations, the healthcare workers have been working below the safety standards, which makes the country's healthcare situation turns into a tragic chaos, and that the austerity measures taken in Greece has put citizens in vulnerable situations. The country's poverty rate among the Organization for Economic Cooperation and Development (OECD) has increased to 32 percent in 2014 from the 11 percent in 2011, the Greek media reports stated.