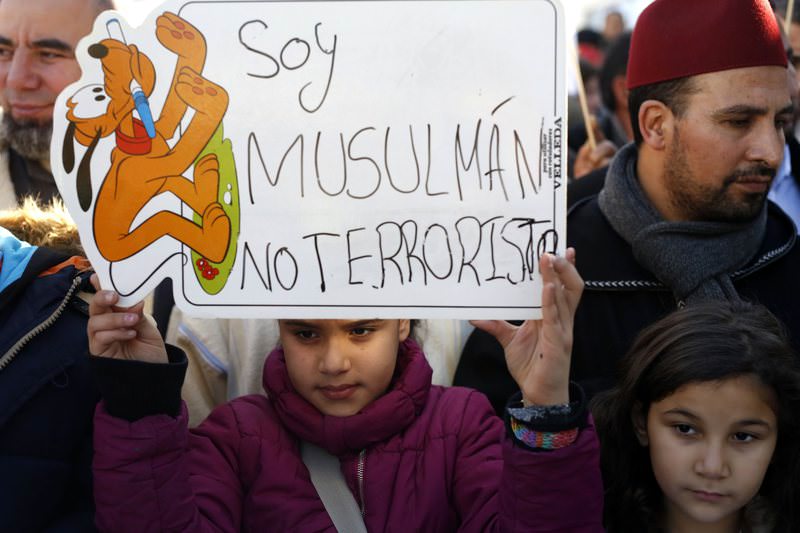 A girl holds a placard that reads ,I am a Muslim, not a terrorist, during a rally by members of the Muslim community of Madrid outside Madrid's Atocha train station, January 11, 2015 (Reuters Photo)
by Anadolu Agency May 26, 2015 12:00 am
Anti-Muslim hostility is on the rise on a global scale, the European Muslim Initiative for Social Cohesion, a non-governmental body, said in its meeting at the European Parliament in Brussels on Tuesday.

The meeting was organized to discuss the increase in Islamophobic incidents amid anti-immigration attitudes across Europe.

"It's indisputable that there has been a rise in anti-Muslim hostility on a global scale," Prof. Bülent Şenay, vice president of the initiative, said.

According to the initiative, anti-terrorism concerns and an escalation in anti-immigration attitudes across Europe have converged on the stereotypical image of Islam as the primary security threat for European societies.

"The line between what is secular law and what is religious activity has to be drawn somewhere," Şenay added.

Dr. Jean Marie Heydt, permanent representative of the European Social Education Training Association, another non-governmental body, said: "There's an obligation to protect people; [But] we have to find a balance between respect for freedoms and security."

Europe is witnessing an increase in far-right parties along with a series of Islamophobic attacks.

Arson attacks on mosques took place across Sweden in December last year, followed by protests condemning such attacks. The German far-right movement Patriotic Europeans Against the Islamization of the West, or PEGIDA has also emerged.
Last Update: May 27, 2015 10:08 pm
RELATED TOPICS