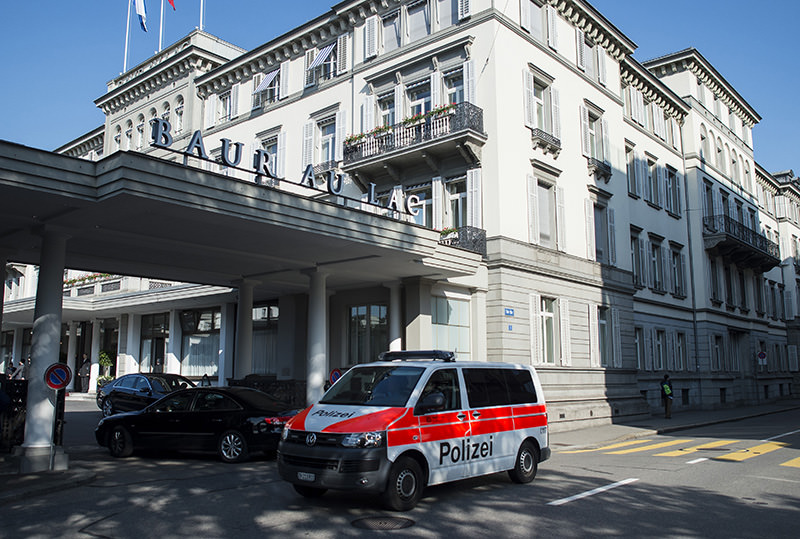 A police vehicle is parked outside of the five-star hotel Baur au Lac in Zurich, Switzerland, Wednesday morning, May 27, 2015 (AP Photo)
by May 27, 2015 12:00 am
The Office of the Attorney General of Switzerland (OAG) has opened criminal proceedings against persons unknown on charges of criminal mismanagement and money laundering in connection with the allocation of the 2018 and 2022 Football World Cups, the Swiss Federal Office of Justice (FOJ) has confirmed after the raid on Wednesday morning.

The OAG has seized data and documents stored in IT systems at the Federation Internationale de Football Association (FIFA) as part of a so-called "collection of evidence on cooperative basis." That means that the party in possession of the data - in this case, FIFA - delivers the requested data to law enforcement authorities, or gives assistance in securing the data, thus facilitating an efficient and swift procedure. The collection of relevant bank documents had already been ordered beforehand at various financial institutes in Switzerland. The files seized today and the collected bank documents will serve criminal proceedings both in Switzerland and abroad.

In the Swiss criminal proceedings, opened by the OAG on 10 March 2015, it is suspected that irregularities occurred in the allocation of the FIFA World Cups of 2018 and 2022. The corresponding unjust enrichment is suspected to have taken place at least partly in Switzerland.

Furthermore, the head office of the damaged party, FIFA, is in Switzerland. For these reasons, investigations are being carried out on the suspicion of criminal mismanagement. There are also suspicions of money laundering through Swiss bank accounts. Subsequently to today's seizure of files, the OAG and the Swiss Federal Criminal Police will be questioning 10 persons who took part in voting on the allocation of the 2018 and 2022 World Cups as members of the Executive Committee in 2010. These persons should be questioned as persons providing information.

For reasons of criminal procedure (principle of proportionality), the procedure coordinated with the requested acts of the U.S. authorities was designed in such a way as to allow the procurement of any criminally relevant data in an effective manner, and to avoid any possible collusion. These measures were carried out simultaneously as a large number of persons involved in allocating the World Cups were currently in Zurich. These legal actions concern two criminal procedures conducted separately by the OAG and the US Attorney's Office for the Eastern District of New York. The Swiss and US law enforcement authorities are not conducting any joint investigations, but are coordinating their respective criminal proceedings.

On 18 November 2014, FIFA had filed criminal charges against persons unknown with the OAG. Therefore, the Swiss proceeding is aimed at persons unknown, with FIFA as the injured party. With this procedure, the OAG is contributing to the struggle against corrupt behavior and money laundering.
Last Update: May 27, 2015 12:23 pm
RELATED TOPICS