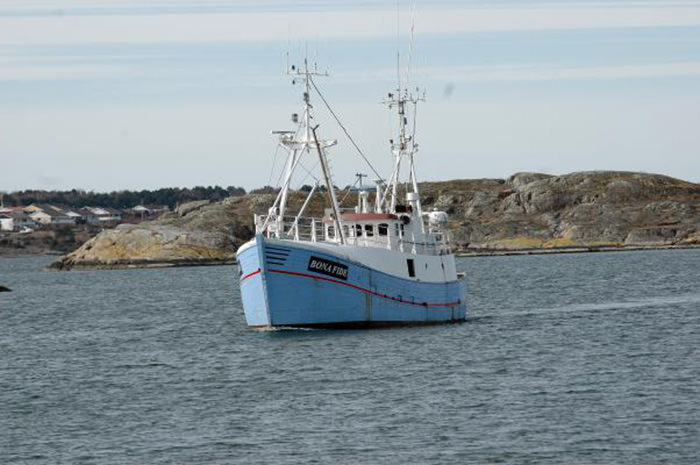 |(Photo by ShiptoGaza.se)
by Anadolu Agency May 27, 2015 12:00 am
A crowd of around 100 people chanted "Long live Palestine, long live Gaza, down with Zionism," at the Brest port in northwestern France on Wednesday as they waved to activists onboard the Marianne fishing boat heading to Gaza as part of the Freedom Flotilla III fleet.

The Marianne boat, with nine people from Sweden and Norway on board, departed from the Swedish Gothenburg port on May 10 carrying solar panels and medical equipment in an attempt to break the nine-year Israeli blockade on Gaza.

"I salute this initiative to break the unjust embargo on Gaza. Those activists are really courageous and brave to take such a step," Sherifa, a 33-year-old doctor, from the crowd showing support, told Anadolu Agency.

Anaele Foveau, a 21-year-old student, said she came to show her support to the activists, calling other associations to take such "brave" steps.

"They came from far to defend a cause that touches every human beings... that's just valiant," said Abdelmounaim El Qsimi, 26, IT engineer.

The first "Gaza Freedom Flotilla" expedition in May 2010 became infamous after Israeli commandos killed eight Turkish nationals and an American of Turkish origin in a raid on the flotilla's ships, the Mavi Marmara. Another person died in a Turkish hospital in 2014 after being in coma for almost four years.

The trawler, which has been jointly acquired by Ship to Gaza Sweden and Ship to Gaza Norway, is set to travel to the east of the Mediterranean and the blockaded Gaza Strip.

Charlie Andreasson, one of the Swedish activists onboard and a participant in the previous such expedition to Gaza in 2008 said: "This move will serve to break the illegal and inhuman siege on Gaza."

"We want to deliver a message to the Palestinian people, we want to tell them you are not forgotten, people do care about you," he added.

Andreasson said that details about the meeting point of the Freedom Flotilla III ships would not be revealed "in order to avoid any possible sabotage by Israeli authorities and their supporters."

"We will meet somewhere in the Mediterranean. We are putting all lights on this boat and will keep the others in the shadow, "he said smiling.

"Previously we had some of our boats vandalized in Greece, Turkey and Gaza," he explained.

The first "Gaza Freedom Flotilla" was led and established by the IHH and was carrying humanitarian aid and construction materials for Palestinians in the Gaza Strip, which was under an Israeli blockade. The second attempt in 2012 was turned back.

The Ship to Gaza organization aims to challenge the naval blockade of Gaza.

According to Asa Opperdoes, a Swedish activist, the Marianne boat will stop in Spain on Wednesday before heading to Portugal.

"We are stopping at different European ports to spread awareness about the Palestinian cause and the situation of the people in Gaza," Opperdoes said.

"A lot of horrible things are happening nowadays everywhere, but people should not forget about Palestine and Gaza," Opperdoes added.

"In case we get attacked, people need to know that they have to spread the word in every possible way, on social media, putting pressure on local politicians etc..," she added.