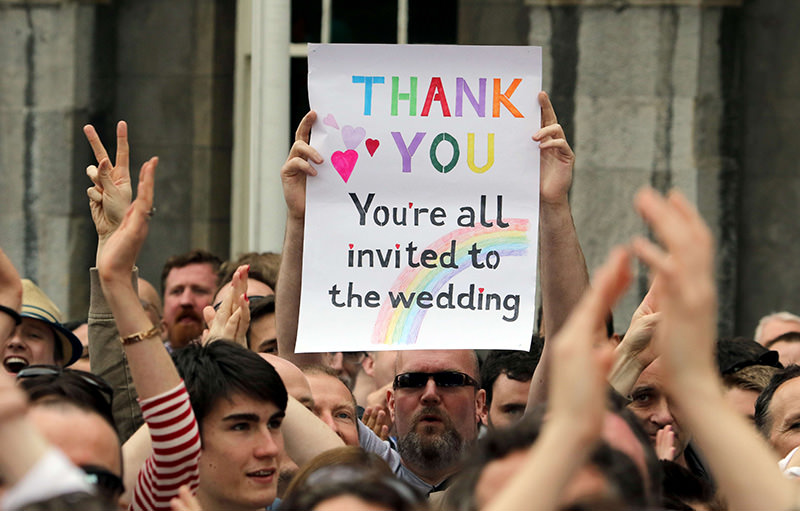 A supporter holds a sign reading 'Thank You - You're All Invited to the Wedding' as he celebrates outside Dublin Castle following the result of the same-sex marriage referendum in Dublin on May 23, 2015 (AFP Photo)
by May 27, 2015 12:00 am
Ireland passed a referendum last week legalizing gay marriage, and according to a top Vatican official, this "is not only a defeat for Christian principles, but also a bit of a defeat for humanity."

Secretary of State Cardinal Pietro Parolin - who is the Vatican's second-in-command after Pope Francis - made the comments late on Tuesday at an awards ceremony. Vatican Radio published them on the next day.

"These results make me very sad. Of course, as the archbishop of Dublin has said, the Church must take into consideration this reality, but in the sense that, in my opinion, it must redouble its commitment and make an effort to evangelize," Parolin also said.

Ireland, a traditionally Catholic country where homosexual acts were illegal until 1993, conducted a public vote Friday on gay marriage in which the 'yes' camp won by 62.1 per cent to 37.9 per cent. The results emboldened gay rights calls elsewhere in Europe.

Earlier this week, the Vatican's official newspaper, L'Osservatore Romano, said the Catholic Church was not going to react by issuing any "anathema" - the harshest language the Church can use in relation to excommunication - but had to "pick up the challenge" posed by the Irish vote.

On Thursday, the head of the Italian Bishops' Conference, Cardinal Angelo Bagnasco, criticized a draft law in the Rome parliament on same-sex civil partnerships, arguing that it was seeking to give gay couples almost the same rights as married couples.

"Leaving terminology aside, it de facto equalizes the legal status of homosexual unions to families based on the union between a man and a woman," Bagnasco told the La Repubblica daily, adding that the church was not opposed to recognizing gay people's "individual rights."

The Catholic Church has always seen homosexuality as a sin, and there is no suggestion its stance may change.

However, a famous 2013 statement from Pope Francis has been widely seen as setting a new, less confrontational tone on the issue. He said: "If a person is gay and seeks God and has goodwill, who am I to judge?"