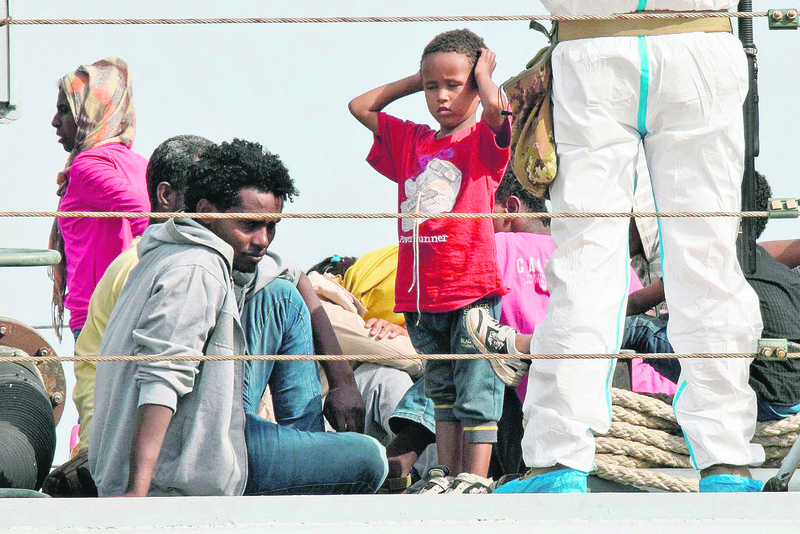 Migrants disembark from an Italian military ship as they arrive in the port of Augusta on the eastern coast of Sicily last week.
by Daily Sabah May 28, 2015 12:00 am

Dealing with a surge of migration, the EU has proposed to relocate 40,000 refugees among EU countries as part of a migration strategy. The proposal has proved controversial with the majority of EU countries have opposed it

The first significant sign of progress on the issue of mass migration to the EU was achieved on Wednesday after the submission of a proposal for a relocation and resettlement scheme to respond to the current migration challenges that the EU is currently facing. As part of a wider ranging migration strategy, the relocation scheme proposes to accept 40,000 asylum seekers and relocate them throughout EU countries in order to share the heavy burden of migrants mostly arriving in Italy and Greece. The proposal has not yet been approved by EU member states and is a controversial issue as the majority of EU countries are reluctant to take in refugees.

"The relocation mechanism proposed in this decision constitutes a fair burden sharing between Italy and Greece on one hand and, on the other hand, member states who are also invited to contribute," EU Commissioner for Migration Dimitris Avramopoulos said.

"I encourage EU member states to show compassion as they consider this important proposal to share their resettlement responsibilities," U.N. Secretary General Ban Ki-moon said during a visit to Brussels, calling the EU's action on the migrant crisis "a step in the right direction."

"This can enable the European Union to address the dramatically increasing flows of people while setting an example for other regions of the world facing similar challenges," he said.

According to the resettlement program under the EU action plan on migration, Germany, one of the largest recipients of asylum applications among EU countries, would receive 8,763 of them, France would take 6,752 and Spain 4,288. The rest would be distributed among the other 23 countries. However, Britain, Ireland and Denmark already opted out of the plan with other Eastern European EU countries opposing the resettlement scheme. Member states would receive 6,000 euros per relocated asylum seeker from the EU.

"Two weeks after adopting our agenda, [the EU] present[ed] concrete proposals for its implementation, with one main aim: Quickly save lives and provide protection in the EU for people in need, be they at sea, in the EU or in third countries. For this reason, we are intensifying our cooperation with countries of origin and transit and with countries hosting refugees, not only to support asylum and migration capacities, but also to tackle the root causes that force people to escape and migrate: poverty, wars, persecutions, violations of human rights and natural disasters," the EU High Representative of the E U for Foreign Affairs and Security Policy Federica Mogherini said.

The European plan on migration was adopted by the European Commission on May 13, 2015. Priority was given to the fight against migrant smuggling and prevention of the exploitation of migrants by criminal networks. The action plan underscores the need for "strong cooperation at the EU level, as well as with third countries of origin and transit, strategic partners, international organizations and civil society" to "counter and prevent migrant smuggling, while ensuring the protection of the human rights of migrants."

Compared to Syria's neighboring countries, the U.N. refugee agency encouraged European countries to do more to share the burden of the international community in the migrant crisis. Even though the number of Syrians who have fled from violence has been increasing, the percentage of refugees heading to Europe remains small with only around 4 percent of Syrians having sought asylum in European countries. Syria's neighboring countries – Turkey, Lebanon, Jordan and Iraq – have over 3 million Syrian refugees, a number that is not comparable with the total number of Syrian refugees that have sought shelter in Europe. Ensuring access to asylum for refugees, including at sea and land borders, remains a significant challenge for EU countries as human rights organizations have urged EU member states to fulfill their international protection obligations.
Last Update: May 28, 2015 10:49 pm
RELATED TOPICS