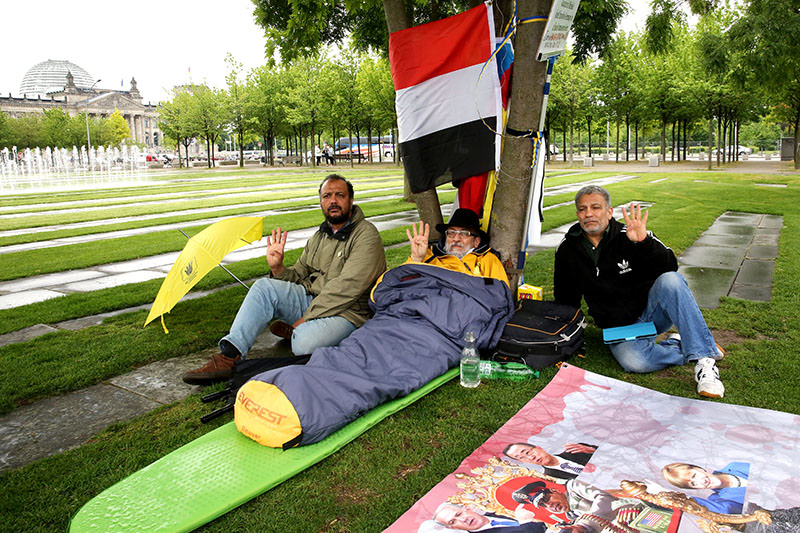 | AA Photo
by Daily Sabah with AA Jun 01, 2015 12:00 am
Three people have started a hunger strike in front of the German Federal Chancellery in Berlin to protest Egyptian President Abdel Fattah el-Sissi's three-day visit to Berlin scheduled to begin on Tuesday.

The Egyptian protestors sat on blankets in front of the building, and unfurled a banner, saying: "Merkel, do not include Germany in the massacre."

Germany-Egypt Union for Democracy Association's president, Ali Alawady, was also among the protestors. He told the Anadolu Agency, due to Sissi's harsh actions, about 7,000 people died during the last two years and 42,000 have been imprisoned.

Four others would also join to their strike, Alawady stated, which is expected to last two or three days. The group thereby aims to draw attention to the current situation in Egypt and have Sissi's meetings in Berlin cancelled, Alawady said. The protestors will not eat anything, but will only drink water at the evenings, and also other protests will take place through the city, Alaway told Anadolu Agency reporters.

In September of last year, German Chancellor Angela Merkel invited Sissi to a first of its kind state visit to Germany, but many MPs later on called on Merkel to consider cancelling Sissi's visit. In May, the Parliament Speaker Norbert Lammert announced that he cancelled his planned meeting with Sissi, due to human rights violations in Egypt.

"We do not understand such an invitation of a country led with democracy," Alawady said, referring to Merkel's upcoming visit with Sissi despite many calls of cancellation. Alawady stated: "Parliament Speaker Norbert Lammert cancelled his meeting with Sissi. This is a good sign in terms of human rights, democracy, and freedom for expression."