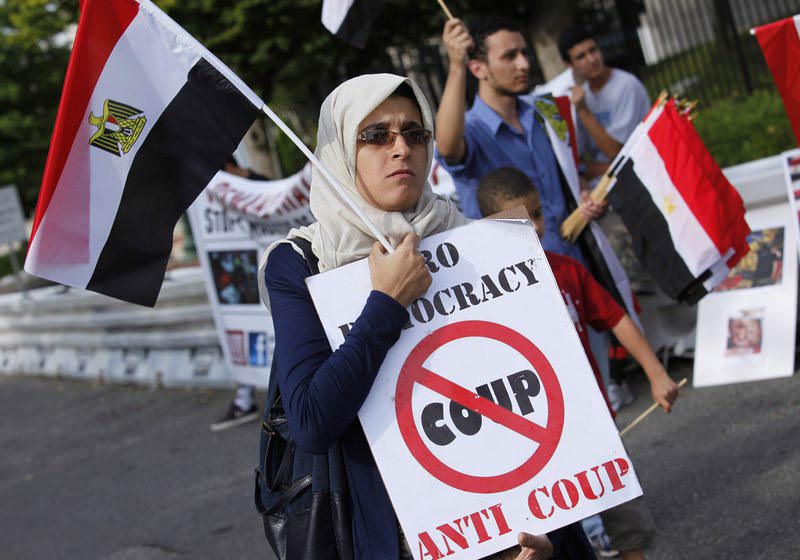 Activists from the Egyptian-Americans for Democracy and Human Rights organization protest outside the Egypt embassy in Washington August 19, 2013 (Reuters Photo)
by Anadolu Agency Jun 02, 2015 12:00 am
Politicians and human rights groups on Tuesday called on the German government to pressure visiting Egyptian President Abdel Fattah el-Sisi to put an end to human rights violations.

Since the then-army chief seized power in 2013, thousands of supporters of the Muslim Brotherhood have been jailed and hundreds sentenced to death in trials widely regarded by international rights groups as unfair.

"The large number of death sentences in politically motivated trials, as the one against former President [Mohamed] Morsi, should be raised in talks with el-Sisi," Heinrich, a member of parliament's human rights committee, said in a statement.

"Chancellor Merkel should take a clear stance against unfair trials and death sentences."

El-Sisi is due to hold talks with Merkel in Berlin on Wednesday and Thursday but his visit has sparked a debate over human rights in Egypt.

Parliament President Norbert Lammert has turned down a meeting with el-Sisi after Morsi and more than 100 of his Muslim Brotherhood supporters were sentenced to death last month over a mass jail break in 2011.

Morsi, Egypt's first democratically elected president, was ousted in July 2013 by the army, headed by el-Sisi.

"The state visit of el-Sisi is a blow to all who stand up for human rights," lawmaker Christine Buchholz said in a statement.

"The Egyptian President will be received by Chancellor Merkel, President [Joachim] Gauck and Foreign Minister [Frank-Walter] Steinmeier. That would further encourage him to follow repressive policies."

Buchholz criticized the government's pursuit of trade and defense deals with el-Sisi's regime.

Fellow Left Party lawmaker Stefan Liebich called for Merkel to condemn human rights abuses in Egypt. "The political show trials in the last couple of years, where hundreds of people sentenced to death sentences, are a disgrace to the Arab spring," Liebich said in a statement.

He called for free elections and the removal of restrictions on NGOs working in Egypt. In February, Egypt's judiciary suspended a general election that had been due in late March.

He added: "Chancellor Merkel should speak out against Egyptian government policies like shutting down peaceful protests and mass arrests solely for alleged sympathy with the Muslim Brotherhood."

The groups called the release of thousands of protesters currently detained over links to the Muslim Brotherhood. They claimed at least 41,000 people were detained between July 2013 and May last year.

Amnesty alleged that than 742 death sentences have been passed against alleged Muslim Brotherhood supporters since Morsi was overthrown.

A number of protests are expected to take place in the German capital during el-Sisi's visit.
Last Update: Jun 02, 2015 7:27 pm
RELATED TOPICS