Egypt's al-Sissi in Germany amid protests 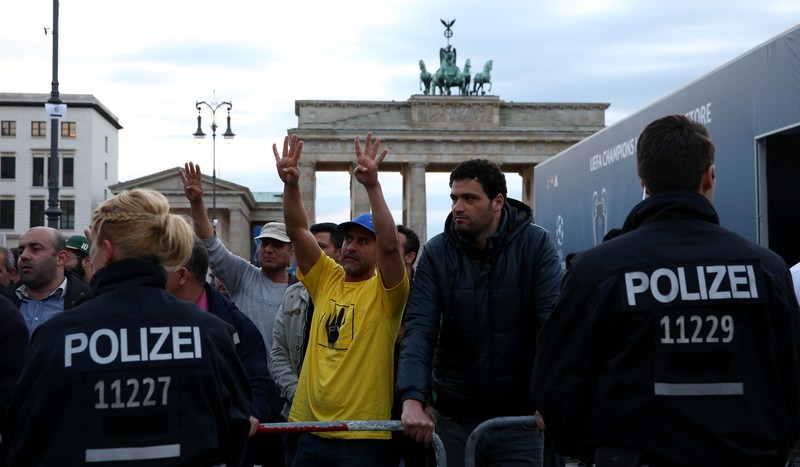 |AA Photo
by Anadolu Agency Jun 03, 2015 12:00 am
Egyptian President Abdel Fattah al-Sissi has arrived in the German capital Berlin late Tuesday for official talks with the country's most prominent officials amid public protests.

Dozens of Egyptian dissidents protested al-Sissi's visit in front of Adlon Hotel on Tuesday evening, where the Egyptian president is staying during his three-day visit. Rights groups have also called for a major rally in front of the German parliament on Wednesday.

Al-Sissi is scheduled to meet with German President Joachim Gauck, Chancellor Angela Merkel and Foreign Minister Frank-Walter Steinmeier on Wednesday. Merkel and al-Sisi are to hold a joint press conference following their meeting.

The Egyptian president's visit has sparked a debate in Germany regarding the status of human rights under his rule.

Parliament President Norbert Lammert has turned down a meeting with al-Sissi. The refusal came after the jailed former president Mohamed Morsi and more than 100 of his Muslim Brotherhood supporters were sentenced to death last month over a mass jail break in 2011.

"The state visit of al-Sissi is a blow to all who stand up for human rights," lawmaker Christine Buchholz said in a statement on Tuesday.

The German government has dismissed calls by opposition parties to cancel the visit and argued that high-level talks with al-Sissi will provide an opportunity to discuss the human rights situation in Egypt.

In a joint letter, several rights organizations including Human Rights Watch and Amnesty International urged Merkel to demand a moratorium on the death penalty and the immediate and unconditional release of all prisoners detained in what they deem to be politically motivated trials.

Egyptian President is scheduled to attend Egyptian-German Economic Forum on Thursday and meet with CEOs of leading German companies.