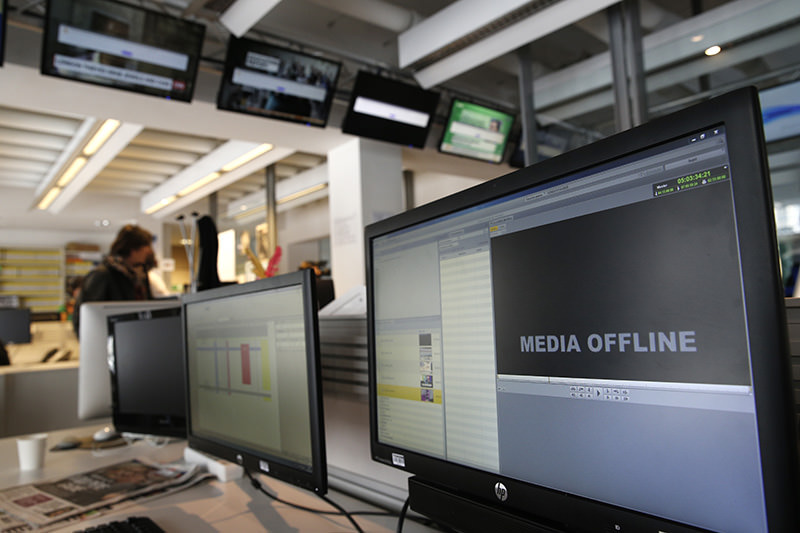 Computer screens are pictured at TV5 Monde after the French television network was hacked by people claiming allegiance to ISIS, in Paris, France, Thursday April 9, 2015 (AP Photo)
by Daily Sabah Jun 03, 2015 12:00 am

Over 2,600 websites in French run by the self-proclaimed Islamic State of Iraq and Sham (ISIS) sympathizers reveals the alarming security situation as the militants can easily target potential French recruits. "Propaganda cells linked to ISIS produce around 40,000 tweets in French each day," Le Monde reported on Tuesday. The frequent use of social media has become more popular among ISIS militants as they spread their views and propaganda primarily through social media networks popular with young people.

As their provocative and offensive views circulate more quickly and broadly among Internet users, their online propaganda operations enable them to recruit new followers. ISIS militants have easily circulated their views through the use of social media, calling on many foreigners to travel to Iraq to fight with them, while influencing more followers who are ready to fight in the Middle East through social media platforms.

France, after Belgium, has witnessed the largest number of youths leaving to join ISIS. As part of the counter-terrorism operation, France has seized six French passports and banned more than 40 people linked to ISIS in Syria and Iraq from travelling abroad. In France, youths have become more interested in ISIS-linked recruitment. It is estimated that 45 percent of the French people calling the hotline to join ISIS were young women. Up to 10,000 European home-grown militants could travel to Iraq and Syria by the end of this year, French Prime Minister Manuel Valls said in March.

Ever since the rise of ISIS, European countries have been suffering from becoming ISIS-recruiting hubs. There are currently around 2,500 to 5,000 documented home-grown European militants. This number is expected to steadily increase while triggering more concerns over the radicalization and recruitment of many young Europeans through ISIS-linked organizations. Europe's police organization Europol underscored that roughly 5,000 radicalized European fighters in Syria will continue to pose a greater risk to European countries as they become more hostile to the West.

The large number of home-grown terrorists is an indication that European countries have to take significant security measures to stop the flow of militants who are looking to return to their homelands, or who want to travel abroad to fight alongside ISIS militants.
Last Update: Jun 03, 2015 5:10 pm
RELATED TOPICS