Police and protesters clash at anti-G7 rally in Germany 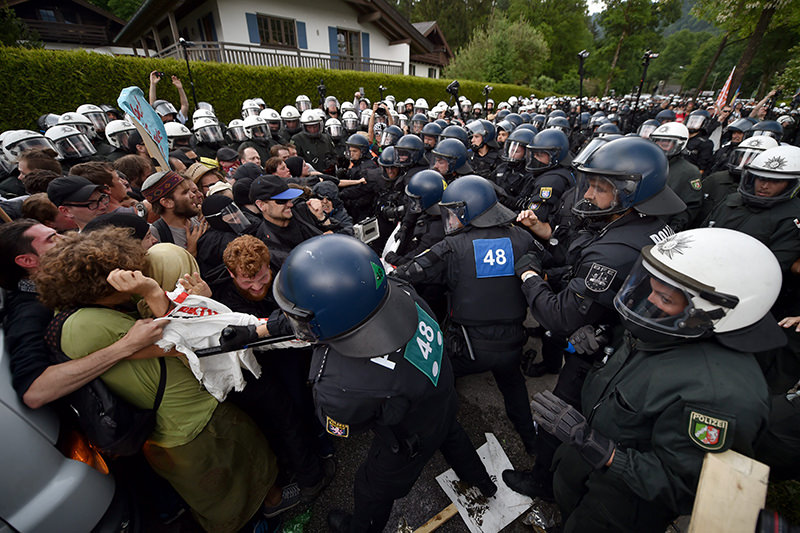 Protestors and German police officers clash during a protest against the G7 summit in Garmisch-Partenkirchen, Germany, 6 June 2015 (EPA Photo)
by Jun 06, 2015 12:00 am
Police and demonstrators clashed in the Bavarian town of Garmisch-Partenkirchen on Saturday at a rally called to protest the Group of Seven (G7) summit of the world's major economies in the nearby Elmau luxury alpine hotel.

The Stop G7 Elmau protest organisers said police provoked the confrontation and accused officers of using their batons on the crowd.

The protestors' camp on the outskirts of the town was evacuated late Saturday after torrential rains raised fears of flooding.

The rally in the centre of the southern German town brought together activists for various causes, from anti-poverty and environmental campaigners to animal rights supporters and those arguing for better treatment for refugees.

The protest was mounted ahead of the two-day annual summit of G7 major economies, which is to be opened by German Chancellor Angela Merkel on Sunday.

But instead of the about 10,000 people the Stop G7 Elmau organisers had expected to attend the rally, they said about 7,500 turned up. Police put the number lower at 3,600.

Protestors carried signs reading "Save the environment from the profit system" and "No intelligent people sells off their democracy."

Another placard read "Stop TTIP!" - referring to the free-trade pact being negotiated by the United States and the European Union, while one protestor held a sign declaring: "Go to hell! I like Putin."

In the town centre, hundreds of police vehicles line cordoned off streets. Many businesses in Garmisch-Partenkirchen have decided to close for the duration of the summit, located in the Elmau resort some 20 kilometres away.

The anti-G7 demonstrators launched their protests on Thursday when about 35,000 people held a rally in the Bavarian capital of Munich calling for the G7 leaders to take action to head off the threat of global warming and to address the social fallout from globalization.

About 23,000 police have been deployed to guard the summit of the leaders of the G7 nations - the United States, Britain, Canada, Italy, France and Japan. Germany currently holds the G7's rotating presidency.

He is set to travel with Merkel to the small nearby village of Kruen, where the two leaders will meet some of the 2,000 residents and the mayor.

When the summit chaired by Merkel begins later Sunday leaders will consider a broad range of issues, from the current state of the global economy, through to terrorism and poverty as well climate change.

The faltering talks between Athens and its international creditors are also to be raised both on the sidelines of the meeting and as part of the leaders' talks on the global economy.

Merkel said Saturday she hoped G7 leaders will pledge to help meet the goal of preventing a global temperature rise of more than 2 degrees celsius in order to prevent the most dangerous effects of global warming.

The agreement in Elmau is needed in order to secure an ambitious, binding agreement at international climate talks scheduled for December, Merkel said in a statement.

"That's why I hope that we can say clearly as G7 countries that we stand by this objective," she said.

The chancellor also said she expected leaders to agree to financing a 100 billion dollar fund that, from 2020 onwards, poorer countries can tap into to help expand climate-friendly economic activity, such as renewable energy.

In London, a spokesperson for David Cameron said the prime minister was "very supportive" of the G7's efforts on climate change.

Of the G7 countries, Japan's climate policies have come under the most intense criticism, noteably for Tokyo's approval of 52 new coal-fired plants as other advanced economies continue to invest more in clean energy.

In an opinion piece for CNN's website, Prime Minister Shinzo Abe wrote that he is setting a target for Japan to reduce its greenhouse emissions by 26 per cent by 2030.

Critics said the plan does not go far enough.

"Instead of 26 percent, it should be a reduction of 40 to 60 percent," said Kiri Hanks, a climate expert for international relief charity Oxfam.

Many environment groups, including the WWF, are urging industrialized countries to completely abandoned fossil fuel-based energy sources by the middle of the century.
Last Update: Jun 07, 2015 3:17 pm
RELATED TOPICS