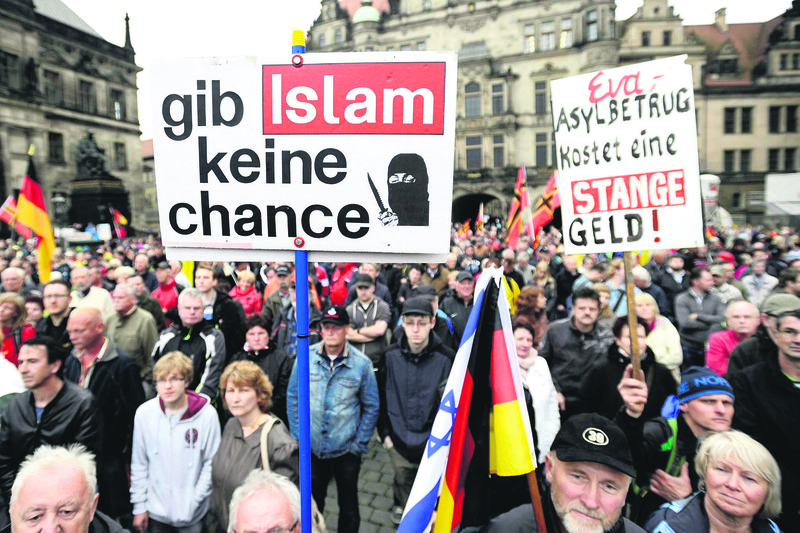 A demonstrator holds a sign that says: u2018Give No Chance to Islam,' at a rally organized by PEGIDA before the elections in Dresden on 7 June.
by Daily Sabah with AFP Jun 08, 2015 12:00 am

The anti-Islam Pegida movement made a better-than-expected gain in the first round of Dresden's mayoral race, coming fourth with 9.6 percent of the votes

Germany's anti-Islam PEGIDA movement took nearly 10 percent of the vote in mayoral elections in its eastern stronghold of Dresden Sunday, a better-than-expected result for a group whose weekly demonstrations have steadily dwindled. In what was PEGIDA's first appearance at the ballot box, candidate Tatjana Festerling came fourth in the city's polls, sparked after the conservative mayor resigned for health reasons, with 9.6 percent of the vote.

Days before the election, police said around 2,000 supporters attended a campaign rally for PEGIDA candidate Festerling held in a picturesque old square between the River Elbe and a castle that once housed the kings of the Saxony state. Above the crowd fluttered dozens of German flags, while placards focused on a gamut of issues from the "lying press," to decrying Islam and the other political parties, or depicting Chancellor Angela Merkel dressed as "Fatima" in a headscarf. Others denounced Germany's President Joachim Gauck as "Uncle Asylum" and showed him dressed in a turban. From a makeshift stage in a truck, a voice boomed out the campaign slogans that are also plastered on boards across the historic city promising "radical change." In campaign speeches, Festerling disagrees with political correctness, calls for a "renaissance" of German culture and condemns those asylum-seekers who have "left family and home because here there's somewhere nice to live and you get dough from the state." The campaign speeches by the 51-year-old divorcee and mother of two also raise the specter of Germany's supposed decline and have a clear "us against them" bent in their tenor.

The best score in Sunday's first round went to Eva-Maria Stange, the joint candidate for the Social Democrats, Greens and far-left Linke, who took 36 percent, followed by a candidate from the pro-business Free Democrats (FDP) with 31.7 percent. The conservative candidate from Chancellor Angela Merkel's CDU party came third with 15.4 percent of the vote, spelling yet another loss of a large city for the Christian Democrats. The mayoral race is set to go to a second round run-off on July 5 after no single candidate managed to win an absolute majority.

The far-right populist movement was founded in Dresden, Germany in October 2014. As a region, Saxony is among the states with the smallest immigrant population at 2.8 percent. The group, quickly became beset by internal strife and scandal among its leaders but managed to spur its copy-cat groups in other cities not only in Germany but several European countries, as well as sparking often far bigger counter-protests. Right after its establishment, Germany witnessed several anti-Islam demonstrations and racially motivated attacks organized by far-right extremist groups. Since then, there have been weekly anti-Islam rallies organized by far-right populist groups in the eastern German city of Dresden. The weekly rallies began with nearly 500 demonstrators protesting the rising number of immigrants. However, the marches have grown much larger with support growing from disenchanted Germans who oppose the "Islamization" of their country. The far-right movement has struck a chord with many Germans after gaining a solid grounding in German society in the face of growing far-right extremism. It has also become a world-wide phenomenon spreading across Europe. Anti-Islam demonstrations modeled on PEGIDA protests were held in Norway and Belgium. The protests later spread to small countries like Denmark and large ones like the U.K. and Spain as the presence of a significant number of Muslims has likely fuelled a resurgence in these countries.

Some demonstrations have turned into neo-Nazi rallies through which hatred and aggression toward Muslims is promoted, especially after the Charlie Hebdo massacre and kosher supermarket killings, in which 17 people were killed in January. The movement attracts support from hundreds of far-right extremists as well as established groups of football hooligans bent on violence promoted by neo-Nazi sentiments. Regarding violent slogans against Muslims in Germany, people are more inclined to act violently against Muslims and immigrants, showing existing neo-Nazi violence in the movement, a charge that the PEGIDA strictly denies.
Last Update: Jun 08, 2015 11:51 pm
RELATED TOPICS