Expulsion of migrants in Paris condemned by French politicians 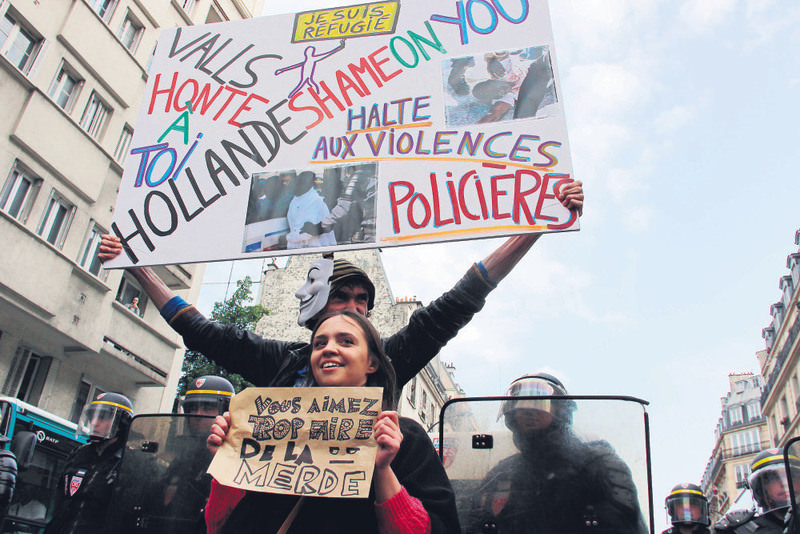 by Daily Sabah with Wires Jun 10, 2015 12:00 am
French police continued to raid Paris migrant camps on Monday, sparking hundreds of people to take to the streets to oppose the evacuation operation led by the French government. The relocation of migrants has become a controversial issue among French authorities. The French city mayor, Anne Hidalgo urged the need to open a center in the capital for migrants, as many of them sleep outdoors.

"As we are now being faced with an influx of migrants, we need to open a center that can help migrants who don't know where they are going to seek asylum," she said, as reported by the Local France. Her idea over relocation was opposed by François Fillon, the former prime minister of France, who proposed to send migrants to their homeland, in an interview with Le Point.

In a letter published on Tuesday in French daily Le Monde, Cécile Duflot, a senior Green politician who was housing minister in the previous Socialist-led government, called on President François Hollande's government to respect the founding principles of the republic through protecting migrants "in the name of the certain idea of France." "We do not ignore the fact that [migrants'] old makeshift camps were insalubrious and posed some problems in terms of public health and security. However, since the evacuation of [the Paris] camp, the situation has revealed a new inhumane attitude towards [migrants]," Duflot said. Duflot also condemned the use of tear gas by French security forces to disperse activists and politicians who had come to support the migrants.

During an operation to evacuate migrants from a northern neighborhood of the French capital city of Paris on Monday, demonstrators clashed with police. Some 120 people were reportedly evacuated from a makeshift migrant camp, as part of an evacuation operation in the 18th arrondissement in Paris from where hundreds of migrants have been cleared on June 2. Footage from the sweeps shows protesters forming a human chain to try to block police from loading the campers on buses.

Last week, French police launched a dawn raid on a camp in northern Paris where more than 350 refugees, most of them from Sudan, but also from Eritrea, Somalia and Egypt, have been living. Hundreds of migrants were cleared from two camps, one under a rail bridge in Paris and the other in the northern port of Calais due to sanitary reasons. In a bid to reach Britain, 385 migrants had been living in desperate humanitarian conditions near the La Chapelle Paris metro station in the 18th arrondissement close to the Gare du Nord station. Because of the burgeoning flow of migrants fleeing war, poverty or persecution in the Middle East and Africa, the humanitarian situation has become precarious, as the region could face an epidemic due to poor sanitary conditions. Meanwhile, some 300 kilometers to the north, police evicted around 140 migrants from two makeshifts camps in Calais, again without encountering violent resistance. One of the camps was very close to the Channel Tunnel through which migrants seek to reach Britain. Tensions in the Calais camps have led to sporadic outbreaks of violence. Around 2,500 migrants, mostly from Sudan, Eritrea and Syria, lived in the makeshift tent village in Calais known as "the jungle." As migrants move further north on to Calais, they find the makeshift refugee camps in northern France are no better than those in Paris.

European authorities are struggling to come up with a plan to confront a growing surge of migrants, many fleeing conflict or poverty at home. Under the EU relocation plan, the bloc would also accept 40,000 refugees from outside the 28-nation grouping and share them around EU states in proportion to the each country's population. Germany and France are expected to take about 40 percent of the migrants. However, the EU relocation plans have raised concerns in France and Germany, and Britain has said it would not participate and some eastern states have called for a voluntary scheme. Recently, Bulgaria, the bloc's poorest member, announced that the country seeks to limit the number of migrants it accepts, fewer than the relocation plan suggests.
Last Update: Jun 10, 2015 10:59 pm
RELATED TOPICS