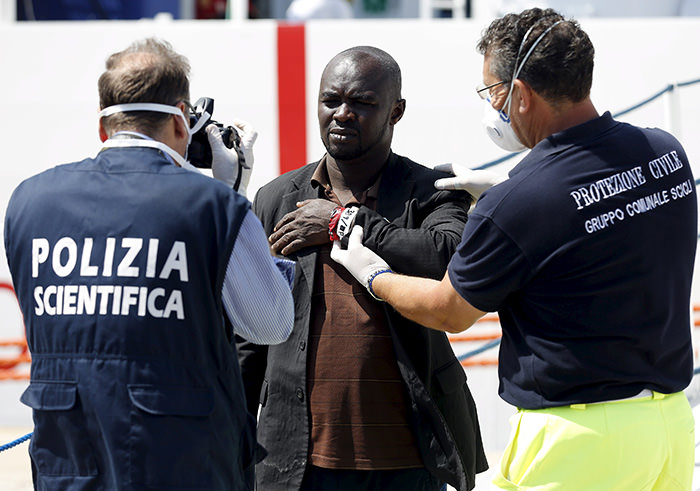 Italian police takes a photo of a rescued migrant with his identification number after he disembarked at the Pozzallo harbour, Italy, June 9, 2015 (Reuters Photo)
by Jun 11, 2015 12:00 am
The man in charge of dealing with Italy's record inflow of boat migrants from North Africa has said Italy's EU partners cannot expect Rome to stop them traveling on to northern Europe. In theory, asylum seekers should stay in the first EU country they set foot in. But many who land in Italy go underground and travel on to Germany and other northern EU states, triggering complaints against Italy. "We do try to keep them here, but clearly it is difficult to stop these people from trying to join relatives, acquaintances, friends or communities in countries where they want, and will always try to go," Prefect Mario Morcone said in an interview with Deutsche Presse-Agentur news agency.

When told that German politicians accuse Italy of being too lax on the issue, Morcone said Rome can in turn complain about Austria failing to control the fairly new phenomenon of Pakistani and Afghan asylum seekers arriving in Italy from Bulgaria and Hungary.

"We will not get anywhere if we start a blame game. What we need is a real common asylum policy for Europe, giving up some national self-interest and remembering that Italy is under particular pressure right now, but others may be in the same situation in the future."

Morcone heads the civil liberties and migration department at Italy's Ministry of the Interior. He oversees the national security apparatus that screens migrants and distributes them in reception centers around the country. Currently, these centers are giving shelter to around 76,000 asylum seekers, while the total number of migrant landings last year was above 170,000. The discrepancy confirms that many who arrive in Italy move on elsewhere.

Morcone was impatient with criticism focusing on reports of overcrowding in migrant centers and corruption in their management. He acknowledged such problems, highlighted by the recent Mafia Capitale probe in Rome, but stressed that not all was bad.