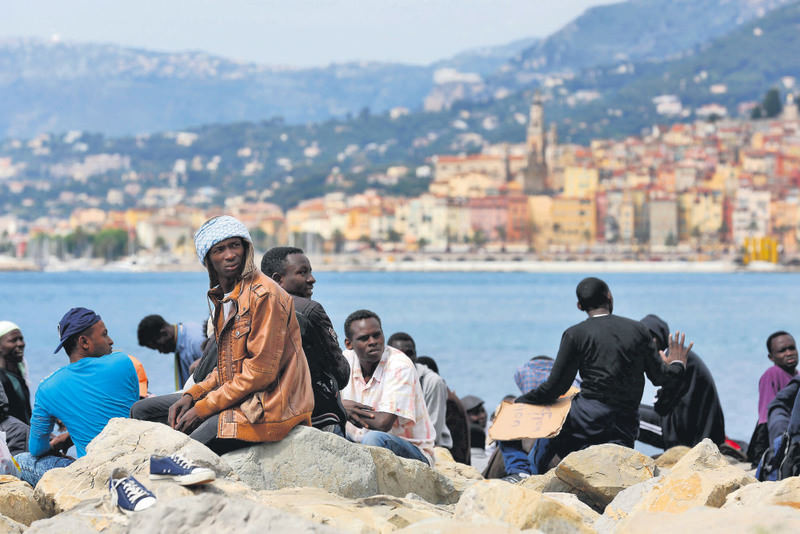 Stranded migrants wait at the Franco-Italian border near Menton, southern France, 14 June 2015. More than 150 migrants who wished to cross the border have been blocked by the French and Italian police.
by Daily Sabah with Wires Jun 14, 2015 12:00 am

Amid tightened border controls, hundreds of migrants are left stranded at the border in northern Italy as France along with many other European countries are blocking border crossings

Dealing with the intensified immigration crisis, European countries have tightened their borders while migrants who managed to reach Europe demand on continuing their journey through Europe, saying that the strict border controls does not comply with human rights under EU rules and treaties. Around 200 migrants who were staging a sit-in on the French-Italian border were driven away by Italian riot police after two days of a hunger strike against French authorities refusing to let them enter the country. The migrants were taken to reception centers in the western province of Imperia. A record 1,439 migrants were intercepted this week by French police in the Alpes-Maritimes region of southeast France, with 1,097 returned to Italy.

In the face of the burgeoning flow of migrants fleeing war, poverty or persecution in the Middle East and Africa, the humanitarian situation has become precarious in France. In a bid to reach Britain, 385 migrants who were living in desperate humanitarian conditions near the La Chapelle Paris metro station in the 18th arrondissement close to the Gare du Nord station was dispersed by French police last week. Hundreds of migrants have been waiting in makeshift camps for their asylum application procedures to be completed. Others who were granted asylum in France are still sleeping outdoors in camps while waiting for lodging. While anti-immigration sentiments have been on the rise in the country lately, French authorities have called for the migrants to be moved as early as possible to more decent shelters. However, migrants still face poor living conditions with authorities currently taking a wait-and-see approach.

Italy has dealt with accommodating the influx of migrants rescued at sea who have been sleeping in train stations. The northern city of Milan has become an important way station for migrants arriving in southern Italy after being rescued at sea, with the city providing food, medical care and beds. More than 64,000 migrants have passed through Milan in the last 20 months. Some 300 to 400 migrants, mostly Eritreans arriving from southern Italy after being rescued at sea, have been sleeping in and around Milan's Central Station the last few nights because of a lack of beds in city-organized centers. Health officials say there have been over 100 cases of scabies in recent days and 500 since the beginning of the year.

Under the Dublin Convention, refugees must apply for asylum in the first country of entry to Europe. Italy considers this rule unfair as it leaves Rome to deal with the thousands of migrants washing up on its shores. The same situation goes for Greece as the country is also dealing with a heavy influx of migrants coming from the violence-hit Middle East and Africa. Despite the fact that the Schengen Agreement has until now meant those landing in Italy and Greece could easily travel within the EU, many refugees who try to make it to wealthier northern European countries have been held in makeshift camps or refugee centers for long periods. Tightened borders prevent many from continuing on their intended journeys in Europe. Border control has been temporarily reintroduced following the G7 summit in Germany a week ago during which there were migrant protests. French police refused entry to people who are waiting at the border hoping to head to northern Europe.

Italian Prime Minister Matteo Renzi called for change in the Dublin Regulations, which assign most asylum seekers to the EU country they first enter, and said he would discuss the issue with French President François Hollande and British Prime Minister David Cameron when they visit Italy this week. "If the European Council chooses solidarity, then good. If it doesn't, we have a Plan B ready, but that would be a wound inflicted on Europe," he said, without giving details.
Last Update: Jun 14, 2015 10:32 pm
RELATED TOPICS