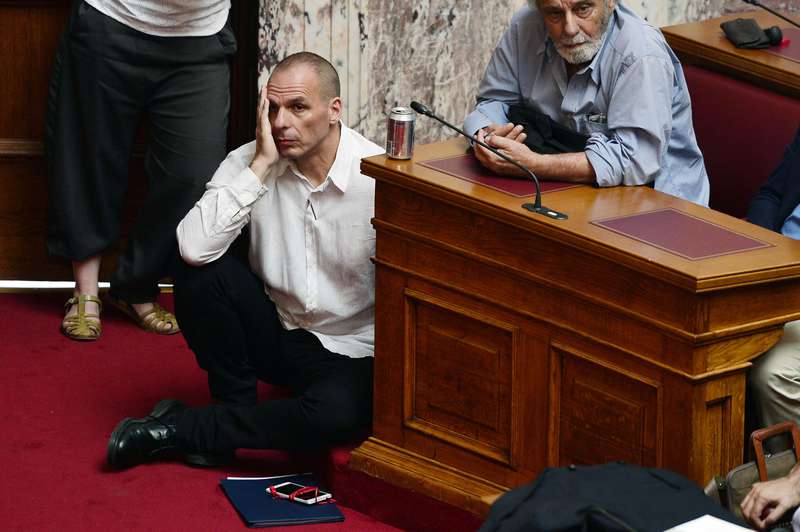 Greek Finance Minister Varoufakis listens to PM Tsipras addressing MP's and ministers at Greek Parliament in Athens (AFP Photo)
by Jun 16, 2015 12:00 am
Greek Prime Minister Alexis Tsipras on Tuesday called on Europe to reconsider International Monetary Fund (IMF)'s harsh reform proposals while accusing the international creditors of trying to "humiliate" the country during his address to members of parliament and ministers at Greek Parliament in Athens .

"The fixation on cuts... is most likely part of a political plan... to humiliate an entire people that has suffered in the past five years through no fault of its own," Tsipras told lawmakers of his radical left Syriza party of the acrimonious talks with creditors that have been dragging on for five months.

The PM's outburst came as Greece faced a pressure to tone down the rhetoric and help reach a deal with its EU-IMF creditors to avert default and a possible "Grexit" -- the term for Athens crashing out of the euro.

The fraught negotiations concern the release of the last 7.2 billion euros ($8.1 billion) in rescue funds of Greece's massive bailout from the International Monetary Fund, European Union and European Central Bank.

The embattled 40-year-old premier held a round of consultations with rival political leaders earlier Tuesday to seek support for a potential compromise deal with just two weeks before the bailout expires.

Also at the end of the month, Greece faces a 1.6 billion euro payment to the IMF, with another 6.7 billion euros due to the ECB in July and August, which Greek officials have said the government cannot afford.

An opposition leader who met with Tsipras said the premier had cited "two or three gestures" that he could make to break the deadlock.

This had raised hope that Athens was about to cede ground to try to avert a devastating default, as EU leaders considered holding an emergency summit over the crisis.

But Tsipras returned to the offensive, accusing the creditors of presenting proposals that merely pooled their toughest demands.

"Right now, what dominates is the IMF's harsh views on tough measures, and Europe's on denying any discussion over debt viability," he said.

It had been hoped that a deal could be reached by Thursday when the Eurozone's 19 finance ministers, who control the purse strings of the rescue programme, meet in Luxembourg.

But Greek Finance Minister Yanis Varoufakis who was among the listeners of Tsipras' speech in the Greek Parliament said that Athens would not bring new reform measures to Luxembourg.

"The Eurogroup is not the right place to present proposals which haven't been discussed and negotiated on a lower level before," Varoufakis told Germany's daily Bild.

German Chancellor Angela Merkel, asked about the state of negotiations on Tuesday, said there was "unfortunately very little that is new to report".

She reiterated that she aimed "to do everything in my power to keep Greece in the eurozone" and was looking ahead to Thursday's meeting of the eurozone finance ministers.

"But there can only be something decided there if there is a joint proposal of the three institutions with Greece. Whether that will succeed by Thursday I cannot say."

French President Francois Hollande was cautiously optimistic, saying: "We are not far from a solution" while calling on Greece to make "alternative proposals".

He too said that "everything possible must be done" to keep the country in the eurozone.
The Syriza party won elections in January on pledges to ease the hardship caused by five years of austerity imposed under two international bailouts since 2010 totaling 240 billion euros ($270 billion).

The government is resisting the demands from the creditors to increase taxes and reform pensions, arguing that such measures have already failed to revive the recession-hit Greek economy.

Greece is staggering under a debt mountain equivalent to nearly 180 percent of GDP, or almost twice the nation's annual economic output.

The office of Greece's top negotiator, junior foreign minister Euclid Tsakalotos, said the creditors were pushing for pension cuts and additional measures to bridge a perceived fiscal gap of 2.5 percent in 2016.

Greece says it has proposed measures sufficient to cover a 2.0 percent fiscal gap, which the creditors dismiss as "uncertain".

Valdis Dombrovskis, the European Commission vice-president for the euro, said the creditors had shown "substantial flexibility".

"What is now really needed is political will from the Greek side to do a final effort to reach an agreement," Dombrovskis said in Vilnius.

Meanwhile sources in Brussels said European leaders are considering holding an emergency summit on Greece this weekend but any decision will depend on the outcome of the Luxembourg meeting.
Last Update: Jun 16, 2015 10:29 pm
RELATED TOPICS