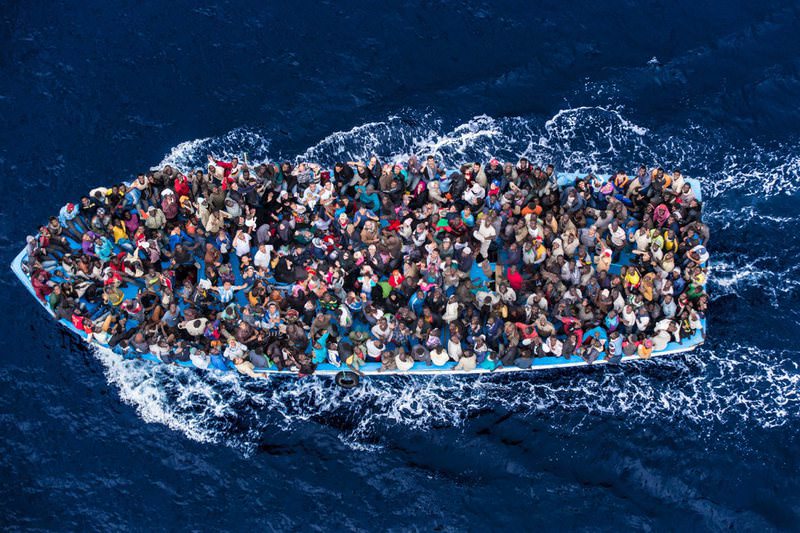 by Daily Sabah Jun 19, 2015 12:00 am
On World Refugee Day, aid groups called on the EU to make a collective effort to minimize deaths at seas, saying that Europe, as the top destination region, has a "primary responsibility for ensuring migration and asylum policies" in accordance with international law and the EU's charter of fundamental rights. The call came ahead of the meeting of EU leaders that will be held next week to discuss proposals for a European Migration Agenda in order to reform and improve EU migration and asylum policy.

In the latest Human Rights Watch (HRW) report, "The Mediterranean Migration Crisis: Why People Flee, What the EU Should Do," human rights violations and abuses in source countries like Syria, Eritrea and Somalia are listed as the main drive for people risking their lives to make dangerous journeis on the sea in order to reach European shores. The major drivers of migration are "systematic human rights violations, poverty, inequitable development, weak governance, and violent conflict and lawlessness" in sending or transit countries.

The report urged the EU to place a human rights perspective at the center of the set of solutions to respond to the crisis. "According to the U.N. refugee agency, UNHCR, 60 percent of the people who took the dangerous sea journey in the first five months of 2015 came from Syria, Somalia and Afghanistan, countries torn apart by war and generalized violence, or from Eritrea, which is ruled by one of the most repressive governments in Africa," the report noted.

"The majority of those crossing the Mediterranean are taking terrible risks because they have to, not because they want to," said Judith Sunderland, senior Western Europe researcher at HRW and author of the report. "Saving lives and increasing safe pathways into Europe should be the EU's priorities while ensuring that all cooperation with countries of origin and transit countries respects international human rights standards."

The EU so far has not found a common ground to impose effective measures to respond to the humanitarian crisis as more people are dying at sea. The EU unveiled a relocation scheme for 20,000 refugees mainly from Syria to get them transferred directly from camps for displaced people in the Middle East and North Africa under a deal with the UNHRC. However, the proposal has not received enough backing from EU countries are in strict opposition to the EU immigration policies due to the unequal sharing of responsibility for arriving migrants and asylum seekers.

"Europe is not shouldering its share of the current displacement crisis. The world's poorest countries and communities host the vast majority of displaced persons. Europe and other developed countries must step up their support," Norwegian Refugee Council Secretary General Jan Egeland said.

He also urged European countries to find a common solution for asylum protection in accordance with the U.N. Refugee Convention signed in 1951, a key legal document in defining who is a refugee, their rights and the legal obligations of states. "Far too many of the world's richest and most peaceful countries are ignoring their global responsibility to provide assistance and protection. They are hiding behind closed borders. Stronger international responsibility sharing is crucial."

Mediterranean Sea crossings continue to climb at an unprecedented level, hitting more than 10,000 since January 2015, according to the figures released by the International Organization for Migration (IOM). More than 600,000 migrants asked for asylum in the EU in 2014. Some 3,500 people have drowned at sea while trying to cross the Mediterranean in 2014 with 1,865 people so far in 2015, Amnesty International reported.
Last Update: Jun 20, 2015 1:34 am
RELATED TOPICS