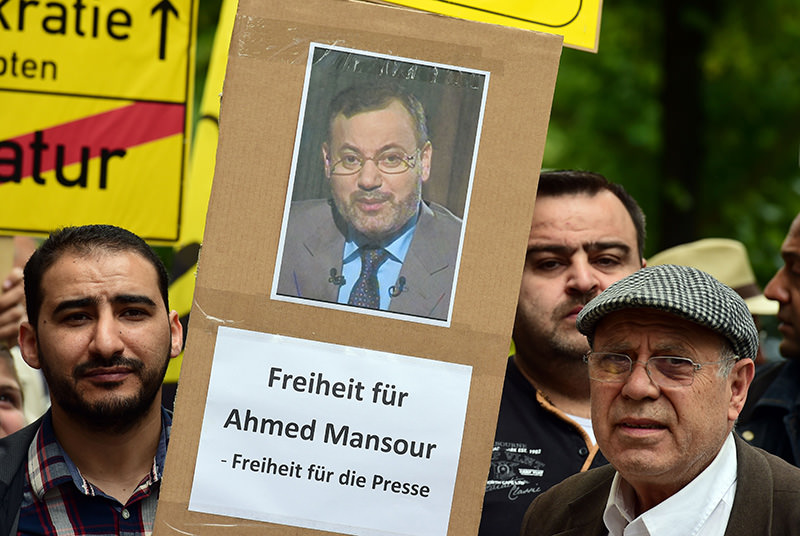 Supporters of Mohamed Morsi stage a demonstration to ask for the release of detained Al-Jazeera journalist Ahmed Mansour in front of the local court of Berlin's Tiergarten district, on June 21, 2015 (AFP Photo)
by Yusuf Selman İnanç Jun 21, 2015 12:00 am

Despite no extradition agreement between Germany and Egypt or Interpol not issuing an arrest warrant, German police arrested Al-Jazeera journalist Mansour on Egypt’s request

A prominent Al-Jazeera Arabic journalist was detained Saturday in Germany on an Egyptian arrest warrant, the Qatar-based broadcaster reported, the latest in a long series of legal entanglements between Egypt and its satellite news channels. Ahmed Mansour, a senior journalist with its Arabic service, was detained at 9:00 a.m. local time while trying to board a Qatar Airways flight at Berlin's Tegel airport heading to Doha, the station reported.

It said he previously had been sentenced in absentia in Egypt to 15 years in prison over allegedly torturing an unnamed lawyer in Tahrir Square in 2011, a charge both he and the channel rejected. While not identifying Mansour by name, German police spokesman Meik Grauer said authorities detained a 52-year-old Egyptian-British journalist and that prosecutors would look into the arrest warrant on Sunday. In October, Al-Jazeera said Interpol had rejected an Egyptian request to issue a Red Notice for Mansour's arrest. The network's acting director general, Mostefa Souag, called for Manour's immediate release in a statement released Saturday evening. "The crackdown on journalists by Egyptian authorities is well known. Our network, as the Arab world's most watched, has taken the brunt of this. Other countries must not allow themselves to be tools of this media oppression, least of all those that respect freedom of the media as does Germany. Ahmed Mansour is one of the Arab world's most respected journalists and must be released immediately," Soaug said. Mansour told Al-Jazeera in a phone call that he would remain in custody until he faced a German judge who will decide on his case.

Al-Jazeera linked the arrest with Egypt's President Abdel-Fattah el-Sissi's visit to Germany and said: "Sissi has largely suppressed dissent in Egypt. Thousands of activists and political opponents have been arrested, prosecuted and in some cases sentenced to death since former President Mohammed Morsi was deposed two years ago." Mansour's lawyer Saad Djebbar was quoted as saying: "The arrest was politically motivated. This is a ploy to terrorize Al-Jazeera journalists and paralyzes Al-Jazeera from doing its work."

In June of last year, three Al-Jazeera journalists, Baher Mohamed, Mohamed Fahmy and Peter Greste were slapped with jail terms ranging from seven to 10 years each after being convicted of "broadcasting false news" and "threatening Egypt's national security." The trio were originally detained in late 2013 at a Cairo hotel only days after Egyptian authorities branded the Muslim Brotherhood a terrorist group. Several Western governments and rights groups have called for the journalists' release amid an international solidarity campaign launched by Al-Jazeera. The Egyptian government accuses Al-Jazeera of bias in favor of Morsi, an allegation the channel denies, amid tension with the Qatari government over Doha's criticisms of Morsi's ouster by the army in mid-2013. As a positive step for rapprochement between the two countries, Greste was released, but the two others remain in prison.

Qatar had backed Morsi, Egypt's first democratically elected president, who was ousted after the bloody military coup headed by the current president. Qatar and Turkey have been the only countries that opposed the coup and Sissi's rule. Saudi Arabia, the United Arab Emirates and Bahrain had withdrawn their ambassadors from Qatar last March due to Qatari support for Morsi and the Muslim Brotherhood, which was labeled a terrorist group by the three Gulf countries and the military-backed Egyptian government. The three states agreed to return their diplomats last month, seeking to patch up the schism between the Arab world's wealthiest countries, which has ramifications across the region, and was a signal of reconciliation between the countries.
Last Update: Jun 21, 2015 4:01 pm
RELATED TOPICS