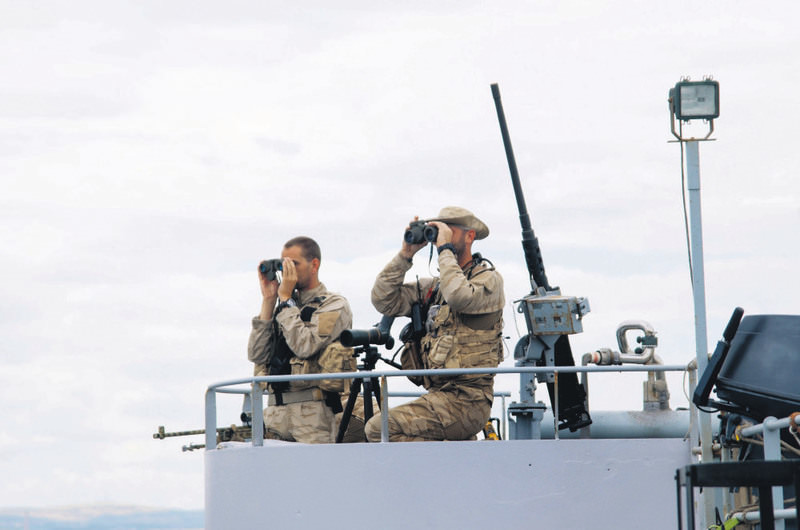 The EU launched a naval operation Monday to try to stop human traffickers bringing migrants across the Mediterranean to Europe in unseaworthy boats. The naval operation, which was officially launched by EU foreign ministers meeting in Luxembourg, will operate in international waters and airspace until the EU can secure a U.N. Security Council resolution endorsing its effort and permission from the Libyan authorities to enter their territory. "We will start implementing the first phase of the operation in the coming days. This covers information-gathering and patrolling on the high seas to support the detection and monitoring of smuggling networks," the EU's foreign policy chief, Federica Mogherini, told reporters. "The targets are not the migrants. The targets are those that are making money on their lives and too often on their deaths," she said.

The EU aims to "dismantle the business model" of the traffickers by destroying their boats. But the U.N. has been slow to endorse the operation amid criticism from refugee groups that the move will only deprive migrants fleeing poverty and conflict of a major way to escape, rather than address the roots of the problem. Libya's divided factions have also been reluctant to approve any operation in its waters or on land, which means that the transition to more robust phases of the naval mission could take months. The internationally recognized government has refused to give consent for U.N. action aimed at endorsing the plan because European governments have discussed it with Libyan militias that control coastal territory. People smuggling has become a major security issue in Libya, severely affecting European countries, with Libya becoming the major port favored by smugglers for illegal immigration. The country has no control or security checks at the border. As the crisis leads to more people fleeing the country, militia groups loyal to rival factions have made huge sums of money by cooperating with people smugglers as they allow them to pass through their territory.

The maritime operation commanded from Rome under the leadership of Italian Admiral Enrico Credendino, aims primarily to protect European borders from the unprecedented influx of migrants attempting to reach the bloc's southern shores by paying smugglers to place them on overcrowded vessels, and to prevent the loss of migrants' lives at sea. The joint costs of the naval operation are estimated at 11.82 million euros for an initial 12-month mandate, plus a two-month setup phase, according to the statement released by the European Council.

Earlier, there were some ruptures between EU countries, as Britain and France prefer using military force against human smugglers, while Germany urges a more cautious stance toward the effectiveness of military action at sea.

More than 100,000 migrants have entered Europe so far this year, with some 2,000 dead or missing during their perilous quest to reach the continent. Dozens of boats are launched from lawless Libya each week, with Italy and Greece bearing the brunt of the surge.
Last Update: Jun 22, 2015 10:09 pm
RELATED TOPICS