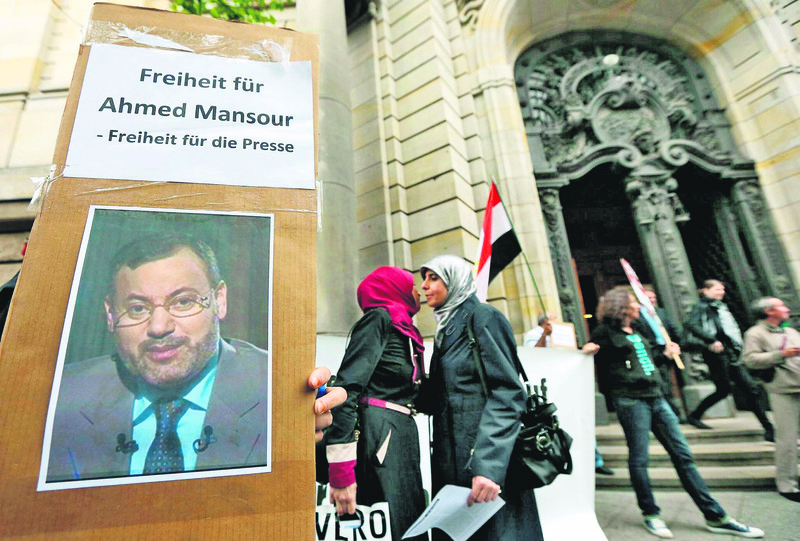 German authorities released Al-Jazeera journalist Mansour who was detained at the request of the Egyptian government. There is no extradition agreement between the two countries and Interpol has not issued an arrest warrant

German authorities released on Monday Al-Jazeera Arabic TV journalist Ahmed Mansour who was arrested and jailed at Berlin airport two days ago at the request of the Egyptian government. In early reports, sources said Germany was considering to extradite the journalist although there is not extradition agreement between Germany and Egypt. A German foreign ministry spokesman was quoted by Reuters as saying that no one would be extradited from Germany if the defendant risked facing the death penalty. While hundreds of people attended demonstrations and protests, more than 25,000 people signed a petition calling on German Chancellor Angela Merkel to release Mansour.

A German court on Sunday ruled on jailing a senior Al Jazeera Arabic TV journalist who was earlier detained at an airport in German capital Berlin at the request of Egypt, his lawyer said. Fazlı Altın, a member of the legal team representing journalist Ahmed Mansour, said Sunday the court ruled on putting his client behind bars as an investigation to learn what would happen to him when he was extradited to Egypt takes its course.

On the other hand, Egypt's Attorney General Hisham Barakat has demanded German and Interpol officials extradite Mansour to Egypt. Cairo judicial sources said Barakat sent a written message to the Egyptian Embassy in Berlin and Interpol via Egyptian Home Ministry's International Cooperation Office, calling for Mansour's extradition. The same sources said Barakat prepared the procedures necessary to extradite Mansour according to the international agreements and the principle of reciprocity.

Meanwhile, Turkish President Recep Tayyip Erdoğan interpreted the decision to arrest Mansour as a case of vested interest. "European states, which leave Turkey alone in fighting terrorism and condone terrorist organization members, unfortunately behaves very differently over a request by coup stagers," he said Sunday. Erdoğan said an EU state, which failed to act when Ankara provided documents on thousands of outlawed PKK members who were freely operating in its borders, saw no harm in detaining a senior journalist from Al Jazeera. "Why? Because Egyptian generals ordered so. Why? [Egypt] gave a 8.5 billion Euro order," said Erdoğan.

In early June, during a visit to Berlin by Egyptian President Abdel Fattah el-Sissi, Egypt awarded Germany's technology giant Siemens 8 billion euros worth of contracts to build natural gas and wind power plants. Mansour was indicted for allegedly torturing a lawyer in 2011 and was sentenced in absentia to 15 years in prison by an Egyptian court in 2014. He denies the allegations. Mansour, who has both Egyptian and British citizenship, was arrested at Tegel Airport as he was heading to Qatar, Al Jazeera said.

Al-Jazeera linked the arrest with Egypt's President Abdel-Fattah el-Sissi's visit to Germany and said: "Sissi has largely suppressed dissent in Egypt. Thousands of activists and political opponents have been arrested, prosecuted and in some cases sentenced to death since former President Mohammed Morsi was deposed two years ago." Mansour's lawyer Saad Djebbar was quoted as saying: "The arrest was politically motivated. This is a ploy to terrorize Al-Jazeera journalists and paralyzes Al-Jazeera from doing its work."

In June of last year, three Al-Jazeera journalists, Baher Mohamed, Mohamed Fahmy and Peter Greste were slapped with jail terms ranging from seven to 10 years each after being convicted of "broadcasting false news" and "threatening Egypt's national security." The trio were originally detained in late 2013 at a Cairo hotel only days after Egyptian authorities branded the Muslim Brotherhood a terrorist group. Several Western governments and rights groups have called for the journalists' release amid an international solidarity campaign launched by Al-Jazeera. The Egyptian government accuses Al-Jazeera of bias in favor of Morsi, an allegation the channel denies, amid tension with the Qatari government over Doha's criticisms of Morsi's ouster by the army in mid-2013. As a positive step for rapprochement between the two countries, Greste was released, but the two others remain in prison.

Qatar had backed Morsi, Egypt's first democratically elected president, who was ousted after the bloody military coup headed by the current president. Qatar and Turkey have been the only countries that opposed the coup and Sissi's rule. Saudi Arabia, the United Arab Emirates and Bahrain had withdrawn their ambassadors from Qatar last March due to Qatari support for Morsi and the Muslim Brotherhood, which was labeled a terrorist group by the three Gulf countries and the military-backed Egyptian government. The three states agreed to return their diplomats last month, seeking to patch up the schism between the Arab world's wealthiest countries, which has ramifications across the region, and was a signal of reconciliation between the countries.
Last Update: Jun 22, 2015 9:57 pm
RELATED TOPICS