Tens of thousands rally against austerity in London 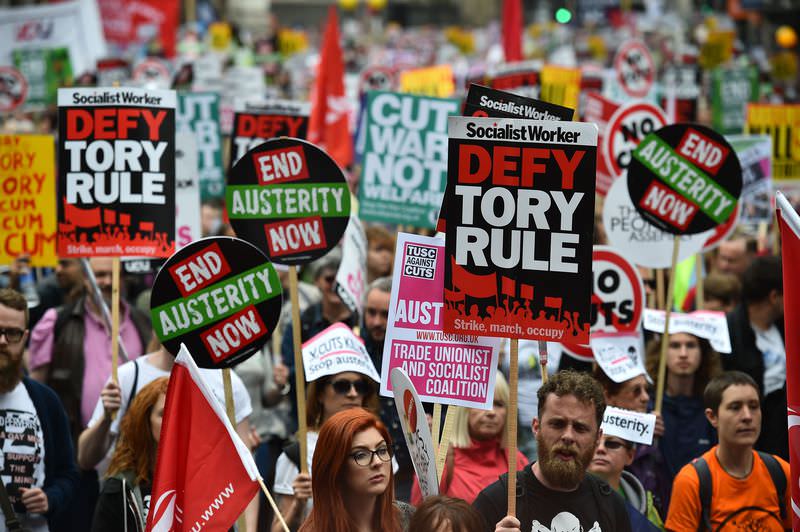 by Jun 22, 2015 12:00 am
Tens of thousands of anti-austerity protesters massed outside Britain's parliament on Saturday to demonstrate against the newly re-elected Conservative government's plans for further public spending cuts.

Holding banners saying "End Austerity Now" and "Defy Tory Rule", protesters had marched from the Bank of England in the heart of London's financial district, in a rally which organisers said drew several hundred thousand people.

Police declined to estimate numbers for the event, which featured speeches from celebrities such as singer Charlotte Church and comedian Russell Brand as well as trade unionists and Labour Party leadership contender Jeremy Corbyn.

"Everyone from up and down the country is here because they have had enough of austerity, cuts and privatisation," university scientist Gareth Hardy told Reuters Video News.

One marcher carried a placard showing Prime Minister David Cameron peeking out of a garbage can -- suggesting this was where his policies belonged too -- while another pictured him with devil's horns.

A small number of protesters let off red-coloured smoke bombs in a mostly good-natured march.

Britain's Conservatives unexpectedly won an outright majority in a national election last month after five years when they had led a coalition focused on cutting public spending to narrow Britain's large budget deficit.

Since winning the election, finance minister George Osborne has said he wants government departments to make extra cuts this year and to commit future governments to run budget surpluses during normal economic times.

The government also plans to reduce spending on social security benefits by a further 12 billion pounds ($19 billion), arguing that high levels of public debt make Britain vulnerable if there is another global financial crisis.

Speaking to crowds outside parliament, Church said people should not be afraid to seek help from others.

"If you feel ashamed that you have to use a food bank because this government would rather see you starve ... walk tall. You have the moral high ground."

The protest was organised by the People's Assembly Against Austerity, an umbrella group with support from trade unions, anti-war protesters and some Labour and Green Party politicians.

"This march has exceeded all expectations," a spokeswoman for the organisers said. "Today is the start of a mass movement to take on this government."

The last major demonstration in central London was in October, when the Trades Union Congress said up to 90,000 of its supporters marched to call for higher wages. A 2011 march organised by the TUC as part of pan-European anti-austerity protests attracted several hundred thousand marchers. ($1 = 0.6296 pounds)